When he started doing the physicals regularly about five years ago, he noticed lots of problems. Sometimes information – especially expiration dates – on the medical cards drivers brought him had been crossed out or modified. O’Desky suspected the truckers had been driving with fraudulent cards.

Sometimes he couldn’t even read the cards because of all the coffee stains. Other times, a driver would claim to have lost his card.

“They game the system all the time,” said O’Desky, 62, who specializes in occupational medicine. “It’s a bad system. That’s really the deal.”

O’Desky set to work figuring out a way to track the exams he gave and limit the amount of fraud. In the process, he created an electronic monitoring system that is close to what the National Transportation Safety Board has been asking for since 2002.

Specifically, the board and members of Congress want a central repository for medical examiners to report the results of their examinations. That way, commercial drivers would no longer be able to go from one doctor to another to get a fitness card – a failed exam would show up for everyone to see. And when drivers are stopped at roadside inspections, their cards could easily be checked.

Such a system “would save millions of dollars every year and millions of lives by keeping these guys off the road who have no business driving a truck,” O’Desky said.

The system O’Desky has set up covers only the truckers he sees, most of whom drive for two local trucking companies. But he thinks it could work nationally.

He and his longtime accountant, Robert Fott, started with a simple Microsoft Excel spreadsheet to track exams. They developed a program and website where they can enter a driver’s information and produce a plastic medical card with the driver’s name, picture, address, signature, medical expiration date and bar code that can be scanned to pull up the driver’s medical information. The plastic cards are not only more durable, they can’t be easily duplicated.

O’Desky said that once the cards were in drivers’ hands, calls started coming in from confused law enforcement officers who were used to seeing the paper cards that anyone can download from Federal Motor Carrier Safety Administration website.

O’Desky expected those calls; what he didn’t expect was a letter from Congress.

In 2008, the House Committee on Transportation and Infrastructure started investigating the medical certification program. Staff collected 614 cards from drivers at roadside checkpoints and sent copies to the examiners listed. O’Desky was one of them. He responded right away, and his comment that “forgery is so commonplace no one gets alarmed about it anymore” appeared in the committee’s report.

A year later, O’Desky was meeting with congressional representatives, the FMCSA and anyone else who would listen to him. Staffers from the offices of Rep. Betty Sutton, D-Ohio, and Rep. Steven C. LaTourette, R-Ohio, came to see his operation firsthand.

“We’ve paraded this in front of more people than I’d care to mention,” O’Desky said. “Everyone says, ‘Great job,’ but in terms of advocacy we’ve yet to find someone to pick up a flag and say, ‘This makes sense.’”

When asked about O’Desky’s program, Maggi Gunnels, director of medical programs for the FMCSA, said, “We really value and appreciate these efforts as long as they meet the minimum data elements.” However, she said, the FMCSA will have its own system in place before long.

Meanwhile, O’Desky has applied for several federal grants, and he and his team are trying to expand the program to other trucking companies. They also think the system could work in other transportation industries, such as rail and marine.

O’Desky said he’s motivated mostly by the thought that medically unqualified truckers are sharing the road with his wife, kids and grandkids.

“Honest to God, I’d give this to the FMCSA,” he said. “It’s coded. It works; the servers are at a government facility. I’d just like to oversee the data part of it. I can see so much that can be done with the information in the system.”

Building the system was fun for O’Desky, a former marathon runner and bike racer with an engineering degree. He said he had played around with electronic medical records and card technology since the early 1980s and wanted to try something more ambitious.

“I never really envisioned this as being an enterprise solution to anything. From the get-go it was primarily a client-based solution,” O’Desky said. “Now it’s so evident that it’s mandatory. You have to do this. Somebody has to do this.” 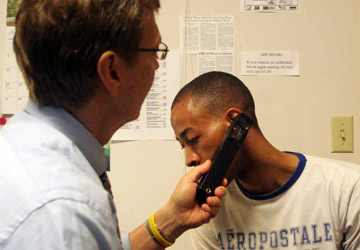 Rodney Blanks, right, a 29-year-old commercial van driver from Cleveland, Ohio, has his hearing checked by Dr. Richard O'Desky in Akron, Ohio. The Department of Transportation requires the exam for all commercial drivers. (Photo by Ryan Phillips/News21) 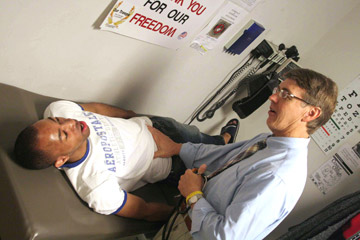