“Avondale blamed the factory going down on the railroad but it would have gone down on its own,” said Rob Lowe, who lives with his wife just a quarter of a mile from the crash site.

About a month after the accident, his wife started hacking and coughing and had to be put on oxygen. When she was admitted to the hospital, nurses said she’d developed asthma due to chlorine inhalation. She had to stay for a week.

Lowe couldn’t sue Norfolk Southern to recoup the money he owed the hospital because he had already signed a release saying he wouldn’t sue.

In the days after the accident the railroad gave out no-strings-attached assistance such as restaurant and hotel vouchers and Wal-Mart gift cards, said Norfolk Southern spokesman Robin Chapman, who handled the public relations response on-site. But once the company packed up its makeshift center in Aiken and set up a more permanent site to handle claims, it shifted its approach. Chapman said the company continued to reimburse people for evacuation expenses, but recipients had to agree not to take part in future lawsuits related to the accident. Lowe signed the paper.

Without admitting fault, Norfolk Southern settled a lawsuit in March brought by the Environmental Protection Agency for damage to the fish and vegetation around Horse Creek. The railroad agreed to pay $4 million in damages for spilling chlorine, diesel and other materials. It also agreed to conduct hazardous materials training for crew members, and to re-stock the creek with fish.

The people in Graniteville will see little of the Norfolk Southern money, however. It will go into two accounts instead, one under the EPA, another technically under the Department of Homeland Security.

After the crash, Napier talked to State Sen. Thomas Moore about appropriating money to fund a memorial to victims of the accident.

South Carolina legislators agreed to set aside more than enough money for the memorial – $340,000 for what they called the “Graniteville Recovery Effort.” But since the little town was unincorporated, the money was funneled through the Aiken County government. Less than a third made it to Graniteville.

“Not one nickel is coming back to the town, where the damage was done,” Napier said. “The town got nothing.”

Even if Graniteville had received the money, and the $4 million to boot, it still would have absorbed millions of dollars in losses. The FRA estimated the cost of the Graniteville train wreck at close to $190 million. And that didn’t include everything.

There was no cost estimate for the cross on the church steeple that had to be replaced because of damage due to acid rain.

It didn’t factor in the new response vehicles that the Fire Department had to purchase after the wiring on the old ones was corroded by chemicals.

And it didn’t factor in treatment for the post-traumatic stress disorder that Erik Svendsen of the University of South Carolina estimated affected 41 percent of those screened by the Aiken County Health Department.

Svendsen is planning a new study this fall to determine whether the lungs of Graniteville residents are aging faster than normal because of chlorine inhalation.

Sanders, who founded the Graniteville Community Coalition to help the town recover, isn’t sure people will want to participate in the study. She knows how much the residents want to forget that the wreck ever happened.

Like them, she wants to see Graniteville become “a bustling little town all over again, like it used to be.”

And like them, she wants something done to prevent accidents like the one that has so traumatized her hometown – no matter the cost.

“If one person dies, to me it’s worth it,” she said. “I know that is not the political way they look at it. They’re looking at dollars and bottom lines. But I’m looking at life. It’s priceless.” 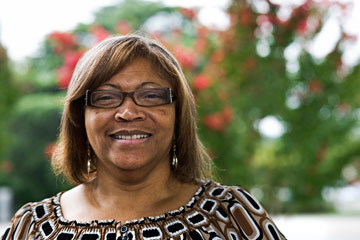 Louisiana Sanders of Aiken, S.C., started the Graniteville Community Coalition to help her town recover after the train derailment. One of her brothers still suffers from a lung condition and another brother lost his job when the town's mill shut down in the wake of the accident. (Photo by AJ Maclean/News21)