No One's in Charge

GRANITEVILLE, S.C. – Phil Napier’s hardware store is the kind that has been largely replaced by Walmart Supercenters and Home Depots. A toy fire truck rests on a shelf lined with certificates of gratitude for the man who voluntarily mows the grass by the memorial the town erected to remember the crash victims.

A dusty lantern from the mountains of Tennessee and an eagle figurine, both rescued from his wife after she threatened them with the garbage bin, are tucked across from a row of silk flowers. He knows everyone who walks through the door.

He’s friends with Diane Goodwin Gunter, who stretches the word “Facebook” to four syllables when she talks about the pictures she’s posted of her grandsons. The delivery boy whom Napier says can come back with change the next day. And the older woman with curly hair whom he whispers is bossy.

Some of the people who come to the store are involved in class-action lawsuits against Norfolk Southern as a result of the accident. They’re looking for someone to pay for what happened to Graniteville.

They can’t forget the blistered and browned grass and shrubs. The thousands of dead fish that floated down from Horse Creek and collected, bleached and stinking, in Langley Pond. The cost of evacuating and then returning to homes and businesses in need of paint and repair.

Most damaging of all, the Avondale Mills textile plant was never able to recover. Its computers were corroded, its metal equipment mottled and encrusted with salts from the chemicals.

Operations had to be shut down for nine days after the crash, and a fire stubbornly raged at the Stevens Steam plant for a week. Avondale Mills limped along for 16 months and then announced it would close. Nearly 2,000 people lost their jobs as well as their pensions and health insurance.

For 40 years, Louisiana Sanders’ brother, Porter Wright, walked to work every day for his job as a machine operator at Avondale Mills. He was 61 years old when the crash happened. The mill’s closure left him with no retirement benefits or health care.

When he got ill with a painful nerve condition in his legs that required medication and a walker, he was unable to pay and too young to qualify for Medicare. “He ends up not getting the medicine he needs each month because he can’t afford it,” Sanders said. “I asked him how he’s doing and he says he just has to endure the pain.”

Sanders’ other brother, Joe Wright, unknowingly drove straight into the toxic chlorine cloud that hovered over the center of town after the wreck. Seeing police, he rolled down his window to ask what was going on and immediately collapsed.

Wright was taken to the University of South Carolina Aiken, where he sat with other victims on a stoop, medical attendants passing oxygen back and forth among them. Then he was bused to the hospital, where he spent five days in intensive care. Today, Wright still has lung problems. Sometimes he feels as if he can’t catch his breath, and has trouble breathing when he’s trying to sleep.

“It will affect him for the rest of his life,” Sanders said.

Someone should have to pay for all that damage, people reasoned. Sanders said “everybody” filed lawsuits.

Some faulted the train crew that had parked the locomotive outside the mill and left the switch in the incorrect position. The NTSB accident investigation revealed that instead of putting the switch back in the normal position, they rushed off work so as not to violate federal rules that limit the workday to 12 hours.

The brakeman of that crew, James Thornton, testified that he wasn’t sure he had put the switch back to the main position.

Others blamed Norfolk Southern. But the lawsuits brought on behalf of the employees who lost their jobs at Avondale Mills were largely unsuccessful. The courts found that in order to hold the railroad accountable for the plant’s losses, it would have to be directly connected to the mill’s economic wellbeing. Norfolk Southern legally didn’t owe the unemployed workers or the company owners anything. 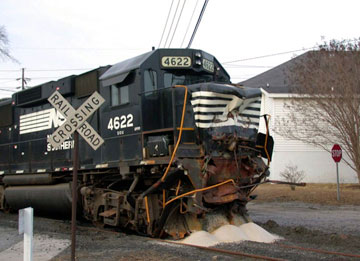 A Norfolk Southern locomotive was damaged when it derailed and hit a parked train in Graniteville, S.C., in 2005. A train switch had been left in the wrong position. (NTSB Photo) 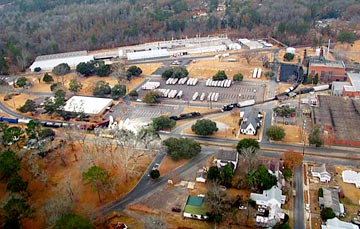 The National Transportation Safety Board said the Graniteville accident could have been averted with an automated train technology that it has been recommending for years. (NTSB Photo) 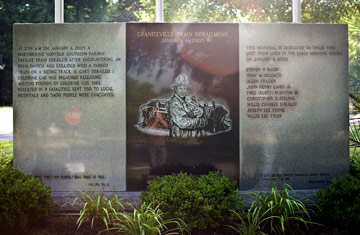 A memorial near the site of the Graniteville train accident lists the names of the nine people killed. (Photo by AJ Maclean/News21)