The force of the collision stripped the floor off the first car and threw the shell of the car forward on top of the stationary train in front of it. Some passengers were hurled from their seats while others were pinned beneath a maze of twisted metal.

Eight passengers and the operator of the moving train were killed. At least 52 others were transported to hospitals for treatment of injuries.

“I think everyone in this region woke up the next day after that crash and said, ‘Who is responsible for looking after safety?’” FTA Administrator Peter Rogoff told Congress during a hearing on the crash later that year. “There really was no one.”

In fact, there is an agency charged with overseeing the safety and security of the Washington Metro – the Tri-State Oversight Committee.

But a FTA audit conducted after the crash was scathing in its assessment of the oversight committee and the Washington Metropolitan Area Transit Authority. The report listed 21 findings, including failure to set safety standards, conduct inspections, issue citations or influence the subway’s operations in any way.

Metro has taken steps to address safety issues since the crash, including pledging more money for safety programs and adding training for employees. However, Rogoff said that even if every one of the 21 suggestions was implemented, safety problems would remain.

“The overarching safety problem… will only be solved through top-to-bottom change in the safety culture and focus at Washington Metro,” he told the NTSB at a special hearing on the crash in February.

The NTSB’s investigation of the crash reached the same conclusion. While the direct cause of the collision was the failure of a segment of the Metro’s track circuits to detect trains, the bigger problem, the board said, was Metro’s lack of a “safety culture” reflected in the lack of standard inspections that could have prevented the accident.

“Metro was on a collision course long before this accident,” said NTSB chair Deborah Hersman at a July hearing on the Red Line crash. “The only question was when Metro would have another accident.”

While some of the recommendations, such as replacing old rail cars, are expensive to implement, others are not, said Sen. Barbara Mikulski, D-Md. Making safety a priority “does not cost money; that costs effort, and it costs commitment and it costs follow-through,” she said in a statement to News21.

The safety issues facing Washington are repeated in other cities around the country.

Trouble in the Windy City

In July 2006, the eighth and final car of a “L” train on the Blue Line in downtown Chicago derailed, leaving about 1,000 passengers stranded in muddy, poorly lit tunnels that filled with smoke from a smoldering fire underneath the train.

The train operator left his train to help dozens of passengers escape the tunnels. Hundreds of other passengers were left to find their own way up to the city streets. More than 150 people were treated for smoke inhalation and other injuries, the Chicago Fire Department reported.

An NTSB investigation found the derailment was caused by severely deteriorated tracks in the tunnels.

At a rail conference in Vancouver, Canada, in June, FTA safety director Mike Flanigon, who inspected the tunnels after the accident, described finding soaked and corroding rail ties and crumbling tracks.

“You could reach down and pull screws out with your hand,” he said.

The NTSB concluded that the accident could have been prevented if the Chicago Transit Authority, which operates the “L,” and its oversight agency, the Regional Transportation Authority, had done their jobs.

The “L” is the second longest and second oldest transit rail system in the U.S. It also carries the third most passengers of any such system each year – more than 198 million passenger trips over 1 billion miles in 2009 alone.

The first parts of the system were built in the 1890s, and tracks for the Blue Line were laid about 60 years ago. Many of those tracks are still in place.

The Chicago Transit Authority maintenance records showed that the agency knew about the deteriorating tracks but did little to repair them or prevent derailments, according to the NTSB. The safety board found that the CTA didn’t give inspectors time to properly check the tracks, ignored previous findings about unsafe conditions and was missing hundreds of maintenance records. 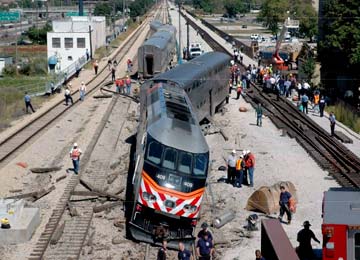 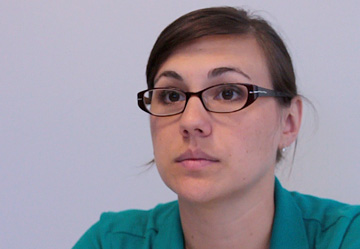 Lindsay Ball was on the Chicago "L" in June when sparks on the Red Line tracks ignited an underground fire, causing rail cars to fill with smoke. Passengers didn't get instructions on what to do, Ball said. (Photo by Ben Giles/News21)