But she couldn’t let it end like that. “Losing him can’t be for nothing,” she thought. So she joined the National Air Disaster Alliance Foundation, a group that represents survivors and family members of aviation accidents.

She started digging into the cause of the crash that killed her husband and learned that a similar accident had taken place 10 years earlier.

The 1994 American Eagle flight 4184 was in a holding pattern over Chicago O’Hare International Airport for 30 minutes. When the plane was finally given clearance to descend, the right wing made a dramatic dip, and the plane went into a spiral at 8,000 feet – a drop from which few pilots can recover. The plane crashed in Roselawn, Ind., killing all 68 people on board.

NTSB investigators said the crash was caused by the plane flying into freezing rain.

Thirteen years earlier, the NTSB had urged the FAA to certify airplanes based on how each craft might respond to different icing conditions, including freezing rain.

The Roselawn crash, investigators said, was a direct result of the FAA’s “failure to ensure that aircraft icing certification requirements… adequately accounted for the hazards that can result from flight in freezing rain.”

Dozens of letters between the NTSB and FAA between 1981 and 2010 show that the FAA consistently fought changing how it certifies planes in icing conditions, citing cost and lack of research.

In one response to the NTSB dated Dec. 21, 1981, the FAA wrote, “These conditions have a low probability of occurrence, and indications are that it would be excessively penalizing and economically prohibitive to require compliance with such criteria as part of a normal icing certification.”

After the Roselawn accident, the FAA formed a task force to start the expensive and time-consuming work of researching and analyzing how rare weather events like freezing rain affect certain types of planes.

Seven years later, the NTSB fired off a letter expressing concern about the slow pace of the work and urging the agency to “give this rule-making project a high priority.”

A year and a half later, a Circuit City-chartered Cessna Citation 560 went down in Pueblo, Colo., with Tricia Coffman’s husband on board.

And once again, NTSB investigators reached the same conclusion as in Roselawn 11 years earlier: “Contributing to the accident was the Federal Aviation Administration’s failure to establish adequate certification requirements for flight into icing conditions.”

The FAA said in a prepared statement that icing presents particularly challenging technical issues and thus takes longer to address than many other problems. For example, the FAA is developing an ice detector that would alert pilots to internal engine icing.

In an e-mail interview, Deputy Assistant Administrator for Public Affairs Laura Brown said that while freezing drizzle and rain have long been considered a potential hazard to planes “their actual effect on performance and handling characteristics were not fully understood until recently.”

Brown said the FAA has stepped up action, issuing several proposed rules and more than 200 directives aimed at reducing icing hazards for more than 50 kinds of aircraft, with the result that icing accidents have dropped by half in the past decade.

A government investigation released in July confirmed that the directives have helped, but the Government Accountability Office also said the FAA needs to do more. The report noted that at least 188 large passenger flights reported icing problems from 1998 to 2007 and that the FAA has not updated its 1997 plan for improving safety in icing conditions.

Tricia Coffman is encouraged by progress in recent years, but she thinks it comes late.

“Of course, I think if these things had been addressed then my husband could still be alive,” she said.

Every day, U.S. air traffic controllers conduct a complex choreography of almost 150,000 takeoffs and landings – more than 50 million a year.

The number of actual crashes is relatively low: Since 1990, there have been at least 79 collisions on runways, according to an analysis of NTSB and FAA data. But the potential for accidents is high, especially as air traffic grows and runways get more crowded, said Sandy Rowlett of NTSB’s Office of Aviation Safety. 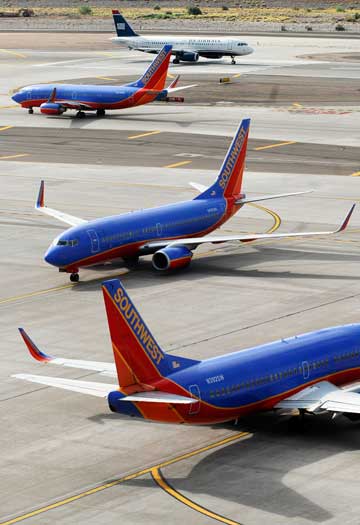 As air traffic increases, so do concerns about congestion on runways. Airplanes taxi during the morning rush at Phoenix Sky Harbor International Airport on Aug. 17. The airport is among the busiest in the U.S. (Photo by Brandon Quester/News21). 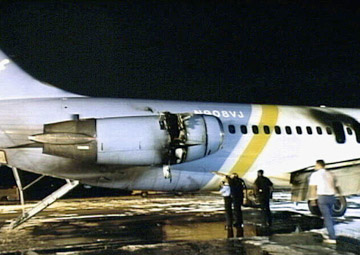 A 1995 engine fire on a ValuJet plane taking off from Atlanta was the result of an inadequate maintenance inspection, according to a National Transportation Safety Board investigation. (NTSB Photo)