In the meantime, a pilot made a wrong turn at an airport in Lexington, Ky., and tried to take off from a runway that was too short. The 2006 accident killed 49 people.

The NTSB said there have been other close calls in Charlotte, N.C.; Cleveland; Traverse City, Mich., and elsewhere.

The elevator is the part on the tail that makes the plane go up or down.

In 2003, a maintenance worker failed to properly tighten a cable on the elevator of an Air Midwest plane. His superior missed the error. One day later, the plane took off from Charlotte, N.C., tilted more than 50 degrees upward, stalled and fell out of the sky, killing all 21 people on board.

Improper maintenance is the second-leading cause of air accidents and incidents, according to FAA data. Poor maintenance or repairs were responsible, in part, for at least 15,000 accidents or safety incidents since 1973, when the FAA started keeping such records. In these accidents, at least 2,599 people died and 4,189 people were injured, according to a News21 analysis.

The NTSB issued 21 recommendations after the Air Midwest crash. The FAA still has not complied with two of them: to prohibit the person training a mechanic from serving as the inspector on that same part and to increase oversight of work done by contracted mechanics.

A FAA spokesman said current inspection practices already address those issues and the agency has met the intent of the recommendations.

In a 2004 letter to the NTSB, the agency offered to remind its inspectors that repairs done by outside shops should be the same quality as those done by airlines. The NTSB called the response unacceptable.

The NTSB called the response unacceptable.

Part of the problem is monitoring the quality of repairs done by hundreds of small and large repair shops here and abroad. Over the past decade, airlines have dramatically increased their use of outside repair shops.

In 2003, nine of the country’s major air carriers outsourced 34 percent of their major repair and maintenance work, according to a 2008 U.S. Department of Transportation Inspector General’s report. Four years later, the number had more than doubled to 71 percent.

In the case of the Air Midwest accident, the maintenance worker who failed to secure the elevator did not work for the airline. He didn’t even work for the company that Air Midwest contracted to do the work; he worked for a repair shop hired by the first company.

Congress has discussed raising the bar on foreign repairs. Proposals include requiring employees at foreign shops to undergo drug and alcohol testing, requiring FAA inspectors to visit the stations at least twice a year and requiring airlines to disclose which non-certified repair shops they use to fix aircraft.

In a written response to questions about oversight of airplane repairs, the FAA said it is doing more to make sure that outsourced repairs meet quality standards by hiring more inspectors and requiring regular audits of maintenance providers.

Recently, the agency also cracked down on some companies for poor maintenance. In 2009, the agency dished out one of its largest fines ever – $10.2 million – to Southwest Airlines for flying more than 30 planes without inspecting the bodies. FAA inspectors found cracks up to 4 inches long on some of the airline’s planes.

And in late June, the FAA said it would seek a $2.47 million fine against Trans States Airlines and GoJet Airlines, which fly for US Airways, for violating a host of repair procedures. The airlines flew 320 flights using aircraft that were out of compliance with maintenance rules.

“Air carriers cannot ignore maintenance requirements or allow employees to take a pass on following regulations,” FAA Administrator Randy Babbitt said after the fine was announced. “Safety depends not only on maintenance work being done correctly but also being recorded properly.” 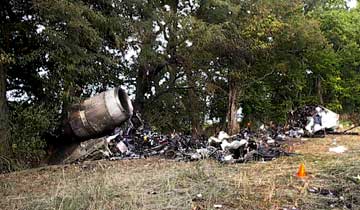 A Comair flight took off on the wrong runway in Lexington, Ky., in 2006, couldn't get airborne and crashed, killing 49. (NTSB Photo) 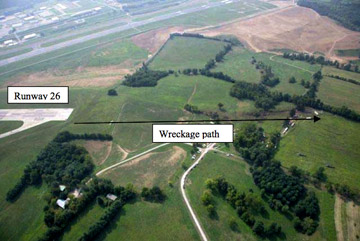 Aerial view of the aftermath of the Comair crash in Kentucky in 2006. (Photo Courtesy NTSB)