Carmody said Engleman Conners is an extreme example but that the other chairs under Bush – Marion Blakey and Mark Rosenker – also were far less aggressive than past chairs.

“Neither of them was interested in shaking up or irritating or being too aggressive with the regulators,” Carmody said. “They certainly were interested in safety, but they were usually looking for ways to work things out, to compromise and see if they couldn’t sit around the table and work things out.”

Characterizing his interactions with regulators, Rosenker said: “My style was never to get in there and start beating people with a big bat. …. I always believed we were partners in the process, never to a point where we were what I would call cozy … but we’re all trying to do the right thing.”

Rosenker said politics had nothing to do with the number of NTSB recommendations issued while he was chairman from 2006 to 2009. He said the number is far more influenced by career staffers who complete and write recommendations than by board members who only vote on them.

“For the most part, even though we were appointed by either a Democratic president or a Republican president, the business of what the board is is not political. It’s safety,” he said. “I may disagree with my colleagues, but it’s normally on the merits rather than on the politics of something.”

Blakey, now president of Aerospace Industries Association, a lobbying group for the nation’s largest aviation manufacturers, declined to be interviewed.

NTSB staff members said there are safeguards in place to ensure they have some measure of independence.

Presidents, who nominate board members for five-year terms, can have three members from their own party, but the other two board members must be from the opposition party. One member – always of the same political affiliation as the president – is separately nominated and confirmed as chair to serve for two years.

The chair has no power over the other board members, and his or her vote holds no greater weight than anyone else’s. But the chair does have the responsibility of overseeing the agency’s finances and guiding its staff as they pursue investigations.

NTSB staff and board members have no obligations to Congress or other government agencies. The chair reports directly to the White House.

“That independence that the board has is pretty jealously guarded, but you can break it down,” Goglia said. “The chairman can break that down because the chairman talks to the White House all the time.”

Or, as former chairman Jim Hall put it: “Obviously, the board members certainly reflect the administration that appoints them.”

Hall, a Democrat from Tennessee, joined the board in 1993 and served as chairman from 1994 until he resigned in 2001. He said the chair is “basically the CEO of the agency and has a great deal of impact on what is done and isn’t done by agency personnel.”

Carmody, who observed Hall while she served as an aide on the Senate Commerce Committee and later served with him on the board, said the NTSB was aggressive under his leadership.

“He got in people’s faces a lot. He annoyed people. And he was not shy about pushing board recommendations, having press conferences,” Carmody said. “I thought the NTSB’s job was to be aggressive, and if the regulators got their noses out of joint from time to time then that was kind of too bad.”

Doug Rabe, a former NTSB official who retired from the U.S. Coast Guard, said the NTSB is much less adversarial than it used to be.

“In the 1990s, NTSB was out to be in the headlines. And you know what? They were in the headlines because they went on scene, made a splash with the press …,” he said. The last decade, he said, has “very much been cooperative.”

Former board members said they are encouraged by what they’ve seen of Hersman, appointed chair in July 2009 by President Barack Obama.

After last year’s deadly Metro crash in Washington, Hersman chastised the subway system for not paying more attention to safety.

“Deborah is more in the mold of the board is there to make a difference,” Carmody said, “and I think she’ll see that it does.” 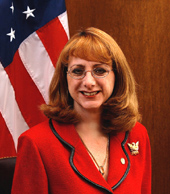 Ellen Engleman Conners, chair of the National Transportation Safety Board from 2003 to 2005.

"Obviously, the board members certainly reflect the administration that appoints them."
Jim Hall, former NTSB chair