The National Transportation Safety Board issued significantly fewer recommendations for improvements in travel safety during the eight years of the George W. Bush administration than during any other presidency in its 36-year history.

A News21-Center for Public Integrity analysis of NTSB data shows that for most of its history the board has been fairly consistent, issuing an average of 300 to 450 safety recommendations a year.

But after Bush took office in 2000, the agency’s activity dropped to the lowest level in its history. In 2005, the board issued just 110 recommendations – by far the fewest of any year since the NTSB was established as an independent voice for transportation safety in 1974.

Over the eight years of the Bush administration, the NTSB averaged only 155 recommendations a year. That’s less than half of both the Republican administrations of Ronald Reagan (445) and George H.W. Bush (417) as well as the Democratic administrations of Jimmy Carter (384) and Bill Clinton (329).

The drop was noticeable in the first year of the Bush administration. In 2001, the NTSB issued 175 recommendations, down from 268 in the previous year, a 35 percent decline.

Some former board members say the decline of NTSB investigations in the Bush administration can be attributed in part to several major aviation accidents in the late 1990s, including the crashes of TWA Flight 800 in 1996 and Egyptair Flight 990 in 1999, which consumed the board well into the next decade.

But they also think there’s another reason for the board’s lack of aggressiveness during at least a portion of the Bush years: Ellen Engleman Conners, who was chair of the board from 2003 to 2005.

Democratic board members Carol Carmody and John Goglia, along with Republican board member Richard Healing, said that Engleman Conners, who came to the NTSB from a post as administrator of the U.S. Department of Transportation’s Research and Special Programs Administration, discouraged investigations.

Carmody, Healing and current board chair Deborah Hersman – then serving her first year on the board – outlined their concerns in a letter to Engleman Conners in 2004. The three complained that she was slowing down work by pinching pennies to the point that staff members were taking turns going to an office supply store to buy paper with their own money.

“You couldn’t buy anything without her signature,” said Goglia, now an aviation safety consultant.

Engleman Conners also insisted that all board votes had to be unanimous, something that had never been common practice.

“She thought the board should vote as a whole and tried to exert pressure in that direction once or twice. That was inappropriate,” Goglia said.

Goglia and Healing said they were pressured by Engleman Conners to change their votes on several occasions, including a vote in 2003 to suspend the operating certificate for a small aviation operator who had failed to take a drug test. An NTSB administrative law judge sided with the operator, saying the FAA had not scheduled the test. The FAA disputed that, and Engleman Conners agreed.

When she learned that Healing, Goglia and Carmody were voting against the suspension, Engleman Conners called a special meeting to try to change their votes, Healing said.

Healing said he was essentially told he could not leave until he voted in favor of suspension. Both he and Goglia relented and switched their votes. Carmody did not attend the meeting.

The decision was later overturned in the U.S. Court of Appeals for the District of Columbia Circuit.

In the view of her critics, Engleman Conners also blurred the traditional lines between the NTSB and the regulatory agencies that are on the receiving end of its recommendations. That included private meetings with the FAA, among others, during which Engleman Conners sought to put to rest dozens of unresolved recommendations in one sitting, Goglia and Healing said.

A besieged Engleman Conners withdrew her re-nomination for chair in December 2005. She continued to serve as a board member until resigning in May 2006, more than a year before her term expired.

Engleman Conners, who now works for NASA at the Johnson Space Center in Houston, declined repeated requests for an interview. 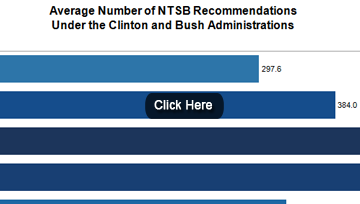 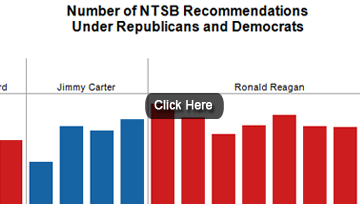