The Trials of a Texter

He dreams he’s back in a Utah jail serving time after he killed two men. They died in a crash Shaw caused when he texted his girlfriend on his cellphone while driving on a stormy mountain road.

Shaw might dream he’s sitting on his thin, blue mattress in a locked cell for 23 hours. Or, he dreams he’s among inmates who despise him because they find his 30-day jail sentence too lenient for two counts of negligent homicide.

Then he wakes, rushes out of bed, opens his bedroom door and his window.

The night air, the stars, the cricket chirps – they all help Shaw understand he is no longer in jail.

He tells himself his nightmare is over.

But he is haunted by his memories.

He can never forget.

Shaw’s 2006 accident and his emotional testimony before the Utah Legislature sparked the passage in 2009 of the toughest texting-while driving-law in the nation.

Safety experts lump texting-while-driving into a category called “distracted driving,” which can include everything from cellphone texting to changing a radio station, applying lipstick or shaving.

Such seemingly harmless activities behind the wheel have killed nearly 27,000 Americans from 2004 to 2009, the last year for which statistics are available, according to the Governors Highway Safety Association.

For Reggie Shaw, now a 24-year-old college student who lives in Salt Lake City, the debate comes too late.

Shaw was a 19-year-old house painter on the stormy morning of Sept. 22, 2006. As he drove to work through the mountains of Northern Utah, pockets of hail hit the windshield of his Chevrolet Tahoe.

He told himself to drive cautiously to avoid hydroplaning.

Shaw texted his girlfriend instead.

He thought he could drive and text safely because nothing bad had happened before.

Shaw shared 11 texts with his girlfriend during 30 minutes while on a two-lane highway. Later, he would say he could not remember what the texts said.

After he pressed “send” for his last text, Shaw’s Tahoe hit a Saturn sedan. The Saturn spun out of control and was broadsided by a two-ton pickup truck. The two passengers in the Saturn – James Furfaro, 38, and Keith P. O’Dell, 50 – were immediately killed. Both were husbands and fathers. Furfaro, a mechanical engineer, and O’Dell, a project administrator, were on their way to work at ATK Launch Systems, a science-based, aerospace company in Promontory, Utah. They were literally rocket scientists.

Shaw called 911 on his cellphone and jumped out of his Tahoe. He ran through the rain to help.

The first question he frantically asked out loud was, “What happened?”

No one knew for sure.

He didn’t blame his texting.

He didn’t even think of it. 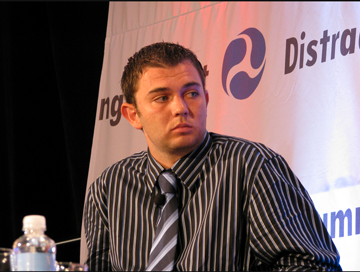 Reggie Shaw speaks frequently about the dangers of texting while driving. (Photo by Jason Meredith/Flickr.com) 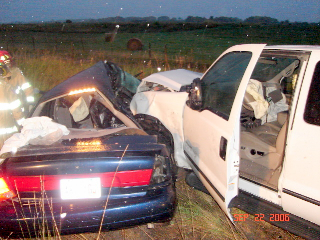 In 2006 Reggie Shaw was driving on a two-lane highway in Northern Utah when he lost control of his SUV, knocking a blue sedan into the path of a white truck. The two passengers in the sedan were killed. (Photo courtesy of Cache County attorney’s office and Utah Highway Patrol) 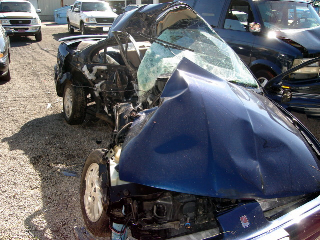 Jim Furfaro and Keith O’Dell were killed in the 2006 accident, which destroyed the Saturn in which they were riding. (Photo courtesy of Cache County attorney’s office and Utah Highway Patrol)