In written testimony in April 2010 to a Senate subcommittee, FMCSA Administrator Anne Ferro said the new program for buses and some trucks is working. The agency is detecting more bad carriers and turning down their applications, she said.

When a company wants to operate a truck or bus across state lines, it has to first register with the FMCSA, which operates under the Department of Transportation.

The company is issued a unique identifying number, or DOT number. For permission to transport passengers, the business also must pay $300 and provide proof of insurance within 90 days to get an additional identifying number, called a motor carrier number.

If a carrier is stopped at a random roadside check, these numbers are checked. If there is a safety violation, the driver might receive what amounts to a ticket and be given a specified amount of time to fix the problem. If there have been previous violations or the safety issue is serious, the vehicle might be ordered of service.

Theoretically, an out-of-service order means that the truck or bus can’t leave the checkpoint until the fine is paid or the safety problem corrected. But “out of service” isn’t always interpreted literally because inspection stations would be crammed with idle trucks. Consequently, most drivers are allowed to travel on. This is one way companies with multiple citations keep driving, according to federal and state officials.

Owners and operators who want to avoid paying fines or fixing their vehicles sometimes simply re-register with the FMCSA and get a new DOT number. Then if they’re stopped, the only information that comes up is their new profile.

Nearly 11 million commercial vehicles were inspected at roadside checkpoints and weigh stations from 2007 through May 2010, according to a News21 analysis of the FMCSA inspection and citation database. About one in five, or 2.3 million, received out-of-service orders for violations of one kind or another.

Most of those were vehicles owned by small companies, according to the analysis. Businesses like Wal-Mart Transportation, with 6,570 trucks, and Swift Transportation Co. of Arizona, with 16,048 trucks, had out-of-service rates of 4 percent and 16 percent, respectively – well under the average.

In addition to roadside checks, the FMCSA conducts compliance audits of motor carrier companies to see that they’re meeting safety standards. But fewer than 4 percent of all carriers are audited each year.

At the same time, trucks and buses were involved in more than 4,000 fatal accidents in 2008, the latest year for which data is available. They accounted for a little more than 12 percent of all road fatalities.

The FMCSA has been aware of problems with reincarnated carriers at least since 2005, when an attorney working for the agency wrote an internal memo to administrators vividly describing the issue. The memo, provided to News21 and the Center for Public Integrity by a congressional staffer who did not want to be identified, states that a “significant number of these carriers are reincarnating or morphing into new business entities and continuing to operate.”

The attorney also wrote that reincarnated carriers would be difficult and expensive to battle legally. The FMCSA would “have the burden to establish that the second company is essentially an alter ego” of the business. 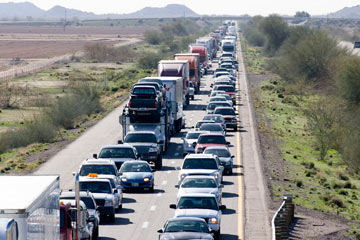 Traffic on Interstate 10 south of Phoenix builds up following an accident in August. There were 5.8 million car crashes in 2008 alone, the latest year for which figures are available. (Photo by The Arizona Republic/Carlos Chavez)