In just two years, more than 1,000 trucking companies and 20 bus companies that had been shut down for safety violations reopened under new names, according to a recent Government Accounting Office report.

The practice, referred to as “reincarnating,” is one of the ways bus and truck companies skirt rules designed to keep roadways safe.

Reincarnation is relatively simple to do but hard to detect, government officials say. Motor carriers that have been ordered out of business or face fines go online, fill out a form and pay a small fee. The U.S. Department of Transportation issues them a new registration number as if they are a new business.

“All they have to do is click on a name, put in a credit card, and you pop up with a new number,” said Nancy O’Liddy, a lobbyist for Transportation Intermediaries Association, a trucking industry group.

There can be legitimate reasons for motor carrier companies to transfer ownership or re-incorporate – such as divorce, death or relocation. But some companies operate with multiple DOT numbers, while others create new companies and register for new numbers over and over again. Sometimes companies share phone numbers and addresses and even buses.

It’s a system in which it’s hard to distinguish the good operators from the bad and even harder to catch them, regulators and safety experts say.

Sometimes it takes an accident to catch illegal operators. That’s what happened in Sherman, Texas, in 2008 when a driver lost control of his bus, which struck a curb, crashed through the guardrail of a bridge and fell about 8 feet before landing on its side, according to a National Transportation Safety Board report. Seventeen people were killed and 15 injured.

Investigators said one of the front tires of the bus had been recapped in violation of federal regulations. The bus company had lost its authority to operate two months earlier because of safety problems, but its owner simply registered under a new name and kept his buses on the road.

For six years prior to the accident, the NTSB had been urging the Federal Motor Carrier Safety Administration to tighten its registration process. The agency did come up with a program that requires new carriers to undergo safety audits and monitoring for 18 months. But after the Texas accident the NTSB said the new program was not working like it should and that more needed to be done.

The NTSB had more criticism for the FMCSA after a Victoria, Texas, accident, also in 2008, in which a bus driver fell asleep and woke up after the bus drifted into the median. The driver overcorrected and flipped the bus, killing one person and injuring 46 others. The company had taken advantage of registration loopholes to get an operating permit, NTSB investigators said.

The board issued 19 safety recommendations as a result of the accident, including better ways of identifying reincarnated carriers and getting them off the roads.

The attention generated by the two Texas crashes prompted Congress to ask for a study of reincarnated carriers. The Government Accountability Office report, released in mid-2009, examined 220 motor coach companies over two years and found that 20 of them had probably registered under false pretenses. It also found 1,073 potentially reincarnated commercial trucking companies.

The numbers, investigators said, were understated because it’s so difficult to catch motor carriers who make small changes in their registrations, such as the spelling of a company name or a change of address or ownership, in order to deceive the agency. Neither did it include cases in which the companies provided bogus information – entirely new names, for example – to hide the reincarnation.

Since the Texas crashes, the FMCSA has begun reviewing applications for signs of reincarnation using a computer matching process to compare applications to a list of motor carriers with poor safety records. New applicants with suspicious profiles are targeted for additional scrutiny, and if a case of reincarnation is discovered the agency denies the company operating authority and takes “aggressive action to place the successor out of business,” according to a statement from the FMCSA. 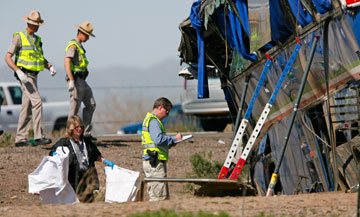 Six people died when a Tierra Santa Inc. bus flipped over along Interstate 10 south of Phoenix in March. The bus company had been ordered out of service for safety violations. (Photo by The Arizona Republic/David Kadlubowski)

Every year, the Federal Motor Carrier Safety Administration orders thousands of large trucks and buses off the road due to safety violations. (Photo by Ryan Phillips/News21) 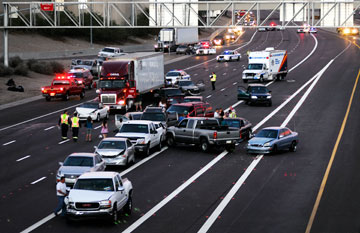 Nearly 70 vehicles were involved in an August accident that closed westbound traffic on Interstate 10 in Phoenix. Car accidents are the leading cause of death for Americans under the age of 34. (Photo by Brandon Quester/News21)