“We’re all walking around with sleep deficits,” he said. “The joke is always: ‘My 90 percent is better than most people’s 100 percent,’” he said. “Well, that’s fine, but it’s not very funny when we have dead people.”

Shappell takes a 13-minute nap every afternoon while sitting at his desk, facing his computer. Anyone walking by might think he’s just checking his e-mail.

Rest periods as brief as 10 minutes can significantly restore the body, Shappell said, especially during a “circadian trough,” or a low period during the day when the body is most conditioned for sleep.

The body operates on an internal clock or circadian rhythm, a one-day cycle that is based on exposure to light cues. Performance dips during two parts of the day: from around 2 a.m. to 6 a.m. and again in the mid-afternoon.

It’s extremely difficult to deviate from the circadian schedule, even over time, according to NTSB fatigue expert Jana Price. That’s why people get jet lag: They’ve changed time zones, but their bodies are still following their internal clocks.

It’s also why almost nobody is truly a night owl, said Price. People who sleep during the day get only very minimal stages of deep sleep, the kind the body needs to restore itself.

“Even people who work a permanent shift-work schedule, even if you worked a midnight-to-8 a.m. schedule, it’s difficult to not be in this constant state of jet lag,” she said. “It’s almost impossible to completely train yourself to be able to function well during the night and sleep during the day.”

People who don’t get enough sleep begin building up a sleep deficit. And to satisfy that debt, they’ll begin having lapses — one- or two-second periods during which the brain starts to enter stage one sleep.

In sedentary locations, like a truck’s driver seat, cockpit or university lecture hall, a sleep-deprived person can easily fall asleep, usually after a series of micro sleeps. In a micro sleep, the head typically bobs and the person comes out of the sleep after a second or two. But before a person can even register that micro sleep, he or she might have slipped into a dozen short, quick bursts of inattention, or “micro lapses,” that the person doesn’t even realize are happening.

The matter of “micro sleeps” has never made it into regulation anywhere in the world, although it’s a frequent problem for truck drivers and others whose “job is to monitor what’s in front of you,” Price said.

More than a third of commercial truck drivers and pilots may have sleep apnea, according to the Federal Motor Carrier Safety Administration and the Federal Aviation Administration. That doesn’t necessarily mean they’ll fall asleep on the job, but it does mean they aren’t getting the kind of quality sleep they need to operate effectively.

People with sleep apnea can wake up multiple times during the night gasping for air and then have trouble falling back to sleep. This is because the throat muscles collapse, causing oxygen levels to drop dangerously low and breathing to pause, sometimes for as long as several seconds. 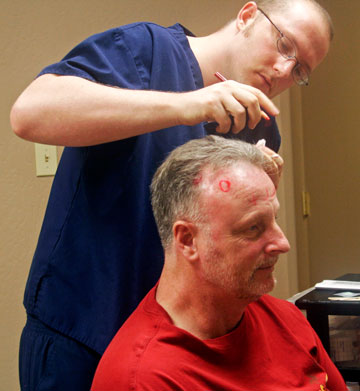 Rodney Chevalier prepares for a night at a Tempe, Ariz., sleep clinic in July. Scientists have made significant advances in sleep research over the past decade. (Photo Tessa Muggeridge/News21)