Eight years later, NHTSA was still studying the issue when a bus carrying 33 members of the Bluffton University baseball team entered an exit ramp outside of Atlanta at high speed, broke through a chain-link fence and dropped 19 feet onto oncoming traffic. Seven people died. Without a black box to give them more data, investigators could only conclude that the driver must have mistaken an exit ramp for a highway lane.

Last year, seven Chinese tourists died in Dolan Springs, Ariz., when their charter bus flipped over. All investigators know is that the driver, who wasn’t texting or drinking, lost control of the vehicle. The NTSB once again recommended that buses be equipped with data recording systems to assist accident investigators.

Each new accident, the safety board said in a letter to NHTSA, is a “missed opportunity” to learn how crashes happen and how drivers react. The information could help officials figure out better ways to prevent future accidents.

In 2008, NHTSA finally came up with standards for black boxes. Each box would record 35 pieces of data, ranging from speed to whether passengers were wearing seat belts, and the data would be accessible to crash investigators.

But the regulations stopped short of what the NTSB had in mind. They covered small cars only, and they weren’t mandatory. The regulatory agency insisted that the decision on whether to install the technology should be left up to car manufacturers, and it avoided the issue of regulating commercial vehicles altogether.

The strategy for small cars has largely worked: Nearly 90 percent of new small cars have black box technology, according to NHTSA. Automakers voluntarily install them because the technology tends to lower their liability in accidents and helps them design safer cars.

This year, NHTSA, major truck manufacturers and the Society of Automotive Engineers, which develops engineering criteria for all kinds of vehicles, agreed to standards for black boxes in heavy vehicles like buses and trucks. The devices would be considerably different from those in light vehicles, NHTSA said in a statement to News21. The agency will evaluate the difficulties and decide by the end of the year whether it will move forward.

John Steiner, a representative of the Society of Automotive Engineers who worked on the standards, said the process takes time because the technology for heavy vehicles is so complex. The weight of buses and trucks has to be taken into account, he said, as well as significant variations in design.

“You could have three models of a Freightliner,” he said. “If you pop the hood, they could be totally different. That’s the challenge on the commercial truck side. The systems have to be completely tailored to need, whether it’s a dump truck or oil rig truck, whereas in a passenger vehicle it’s simple.”

It also takes time to convince manufacturers that the cost is worth it, especially when they’re already hurting economically, Steiner said. A black box for a large truck can cost $600, he said.

William Messerschmidt, who runs a website on data recorders for trucks and also started a private firm that investigates accidents, said cost isn’t the only reason some manufacturers still oppose the technology.

Information from data recorders can be used in lawsuits and in criminal trials, he said. There’s a lot of concern about putting data “out there for everyone else to see.”

The Motor Vehicle Safety Act of 2010 is a sweeping piece of legislation that would give NHTSA more resources and more teeth. For example, the agency could order manufacturers to immediately recall unsafe vehicles and impose higher fines on carmakers. The act also would require small, light-duty cars sold in the U.S. to have black box data recorders rather than leaving that decision up to manufacturers. 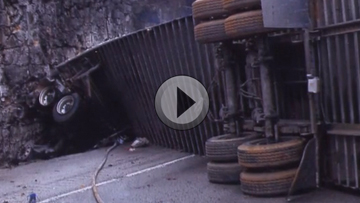 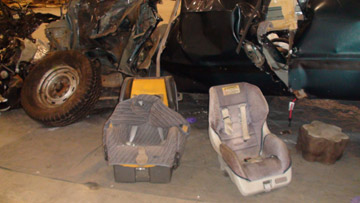 The only two survivors of the Kentucky crash were the two children who were strapped into these child seats. The debris from the accident resides at a warehouse in Munfordville. (Photo by Aarti Shahani/News21)