In June, Senator Tom Udall, D-N.M., introduced an amendment that expands the black box requirement to all medium and heavy vehicles. The amendment received bipartisan support in the Senate Committee on Commerce, Science and Transportation but has yet to go further.

Udall said leaving out buses and trucks is a gaping hole in the legislation. “Many of the larger vehicles have some of the more serious accidents,” he said in an interview. “If you have a concerted effort and a comprehensive program, you can bring down the numbers of fatalities.”

Tom Kowalick, an engineer who has championed black boxes for years, said the Motor Vehicle Safety Act would propel highway safety into the 21st century. Of the roughly 6 million road crashes each year in the U.S., “No two are exactly alike in real life,” he said. “But in the crash lab they’re all alike.”

Still, Kowalick is skeptical about the bill’s passage. He said he went to one Senate hearing armed with pictures of a dramatic crash. He showed them to one senator, whom he prefers not to name.

Federal regulators in June shut down Hester Inc., the company that operated the Freightliner involved in the Kentucky accident. The company was cited for ongoing violations, including truck drivers who drove shifts of 11 hours and longer.

That same month – before rain washed away the scorched rock or a new accident buried the traces of the one that killed his son – Gingerich returned to the I-65.

He pulled over on the shoulder and waited a moment, watching the traffic and absorbing the sound of tires hitting pavement. Orange flags still marked the spot where the Freightliner ran over the barrier cable. The tire tracks were still visible

Gingerich climbed out, measuring wheel in hand, and crossed to the median. He tried to estimate how many feet the truck traveled before hitting the church van, the angle at which it hit and the speed of the van on impact. “Was the driver angry at the whole world?” he said he wondered. “Did he want to die and take others with him?” “Did my son see the truck before it hit him?”

He knows that no one can say for sure whether the accident was due to human error, mechanical failure, imperfect highway design or a perfect storm of all these factors. But he had to try to figure it out for himself.

McDaniel walked through the warehouse a few months after the accident, pointing to an engine here, a transmission there and the Freightliner’s cargo of giant brake drums littering the floor.

“That’s the van,” he said, stopping in front of the wreckage. The front passenger seat is folded in like a boomerang, the roof missing.

“The toddlers survived in (them),” McDaniel explained. Another car seat is still in the van; the infant who was supposed to be in it died in his mother’s arms.

In the corner, as far as possible from the van, is the truck. The trailer is splayed, wheels up. The rig is smashed so badly it looks like a broken crane. It took more than six hours for emergency personnel to gather up the pieces, which investigators hope will help answer the questions that haunt McDaniel, Gingerich and the others.

For now, these piles of debris are the only clues they have. 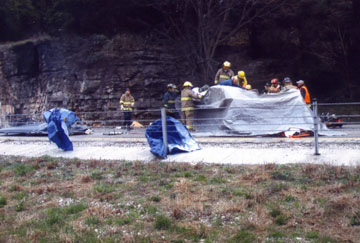 First responders cover the church van to shield the bodies of victims from news helicopters and onlookers after the crash in Kentucky. It took more than six hours to collect all the debris. (Photo courtesy of Hart County Coroner Jeff Roten) 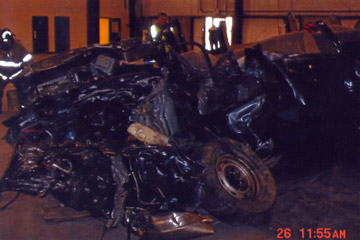 The remains of the Dodge van were brought to a warehouse in Munfordville, Ky., after the March crash. First responders stripped the roof off the van with the Jaws of Life in order to remove the bodies. (Photo courtesy of Hart County Coroner Jeff Roten) 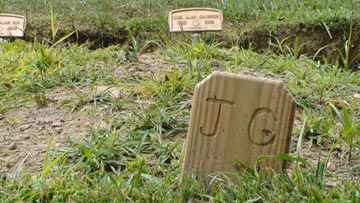 Joel Gingerich, 22, is buried near eight other members of his church, including his fiancee Rachel Esh, in the back yard of the Marrowbone Christian Brotherhood in Munfordville, Ky. (Photo by Aarti Shahani/News21)