“How much government control, government intrusion, becomes necessary in that?”

On a sunny Saturday in June, Lake Pleasant near Phoenix was filled with boaters racing past each other, many of them going in opposite directions. They were ignoring a state law that requires boaters to go counterclockwise around the lake to avoid collisions.

Children without life jackets clambered around boats, another violation of Arizona law. Boaters ignored safety guidelines by diving into the water without bothering to put up a flag to alert others. Some boats had flags up even though there were no people in the water.

Coast Guard Auxiliary volunteers patrolling the lake that day found one person who had anchored his boat off the back rather than the front. The boat could easily have been swamped by a wave.

Before the day ended, volunteers towed to shore two boaters whose engine had quit. The boat had no marine radio, and the boaters’ cell phones didn’t work. A family member who grew concerned when they didn’t return asked the auxiliary to look for them.

When the Coast Guard volunteers found them, they had been sitting in the uncovered boat for hours without drinking water. The only life jackets on board were ill fitting and in poor shape.

Most of the time boaters aren’t willfully violating the law or purposefully doing something dangerous; they just don’t know any better, said Cris McSparen, general manager of Scorpion Bay Marina on Lake Pleasant. He estimated that 70 percent of the people he rents boats to have little to no experience on the water.

He said the instructions boaters get before they go out usually are enough to keep them safe, but Gossard disagreed.

“If most of those people took an exam on boater education, most of them would flunk…,” Gossard said.

That’s what happened in Alabama, where a boater’s license has been required since 1995. Boaters have to pass an exam similar to the test for a motor vehicle driver’s license.

Charley Grimsley, who was commissioner of Alabama’s Department of Conservation and Natural Resources at the time, said people who had been boating for years failed the exam the first time they took it.

This summer, one of Grimsley’s relatives set out to get her license. She did nothing to prepare for the exam, assuming that years of watching her father pilot a boat was enough.

Cindy Kominska of Tempe, Ariz., has become a vocal proponent of boater education requirements since a 1996 accident left her son Michael in a coma for four months.

Michael, who was 11 at the time, was riding a jet-ski on a lake near Phoenix when another jet-ski struck him and knocked him unconscious. Years later, he still faces cognitive disabilities. The right side of his body is too weak for him to walk normally.

The operator of the other jet-ski was a woman with no formal boater education (it is not required in Arizona). She was jumping other motorboats’ wakes when she hit Michael.

A boater education class would have taught her to keep her distance from other jet skiers, especially when doing something risky like jumping wakes.

“If there’s no law that requires you to have this certification, anybody and his brother can get on a jet-ski and do whatever he wants,” Kominska said.

The current NTSB recommendation for education is actually a watered-down version of what the board wanted, Gossard said. The original recommendation asked states to pass laws that require boaters to take a test and get licensed, similar to what Alabama has in place.

But the board quickly realized it wouldn’t get anywhere with that recommendation and downgraded it to a simple course for boat operators, Gossard said. 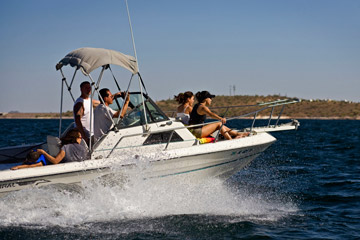 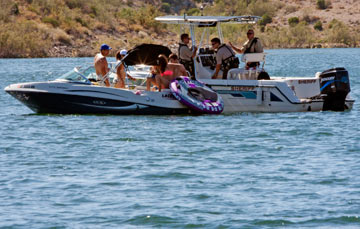 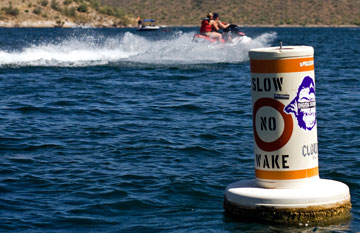 Recreational boaters often speed by each other in close proximity and violate other boating safety laws, according to the U.S. Coast Guard Auxiliary. (Photo by AJ Maclean/News21)