Of all heavy maintenance checks outsourced by U.S. airlines, 21 percent took place at foreign repair stations in 2003, according to a 2008 Inspector General’s report. That number increased to 27 percent in 2007. Heavy maintenance includes taking apart an aircraft for safety checks and putting it back together – a process that can take several weeks.

All heavy maintenance outsourced by U.S. airlines, both domestically and abroad, has more than doubled, rising from 34 percent in 2003 to 71 percent in 2007, according to the same report.

Those numbers could be even higher because the FAA only requires airlines to divulge the top 10 stations they use most often for major repairs, according to the report.

Many air carriers in America have faced financial distress over the past decade, and some have gone bankrupt. Goglia said airlines face pressures to outsource to maintenance facilities with the lowest prices, and that could mean planes are receiving lower quality repairs.

“The airlines will make a switch to another vendor for seemingly minor differences in price,” Goglia said. “That does lead to considerable amounts of pressure on any vendor providing services to an airline.”

The number of outsourced airplane repairs is no doubt much larger than the FAA numbers indicate. That’s because they only account for repairs done at certified shops.

The FAA certifies more than 4,100 maintenance facilities in this country and more than 700 abroad to work on U.S. aircraft. But the FAA doesn’t require airlines to use those shops. Airlines can go to non-certified repair stations that are inspected only by the airlines that use them – not the FAA. The mechanics there must follow the airline’s manuals and guidelines.

“Why do we have certified repair stations if people aren’t required to use them?” McCaskill said.

In 2007, the Department of Transportation sampled 19 air carriers and found that all of them were outsourcing to non-certified facilities. In its report, the DOT’s inspector general identified more than 1,400 non-certified shops performing maintenance for those aircraft, 100 of which were foreign stations in countries such as Aruba, Belize, Bermuda, Haiti and Mexico.

Sometimes repairs are as simple as boxing up a cockpit screen and sending it off to a television repair shop. Other times they are as complex as sending landing gears parts to a shop in Mexico for chrome plating.

When airlines outsource to countries where the rules are more lax “you’re increasing the risk a little bit,” Goglia said. “Risk is like a ladder. If you raise the risk and go up the ladder, the danger of falling gets greater and greater.”

The FAA said in a prepared statement that it closely regulates and monitors repair stations, both domestic and foreign and that air carriers and contractors are required to comply with federal regulations.

Typically, FAA inspectors visit foreign repair shops once a year, and the stations are notified in advance when the inspections will take place.

In the U.S., repair shops are inspected every month or so by the FAA, and those visits often are surprises.

“I can expect to see the FAA at least once a month, if not more,” said Dave Supplee, former director of flight safety with the International Association of Machinists and Aerospace Workers union. “Many of our FAA people are known to us by name.”

But the 2008 inspector general’s report reveals that in some cases foreign repair stations used by U.S. airlines can go up to five years without an FAA inspection.

“When the FAA wants to visit them, they have to call a couple weeks in advance and make an appointment,” Goglia said. Then the repair stations “clean up the shop… When you come in it’s all tea and crumpets. Everything’s perfect.”

Because the FAA only visits foreign repair stations annually at most, there’s a long lag time before inspectors check to see if problems have been fixed. In fact, foreign shops can just send a letter stating that improvements were made, said Linda Goodrich, a longtime FAA inspector who now serves as vice president of Professional Aviation Safety Specialists, the union for FAA safety inspectors. 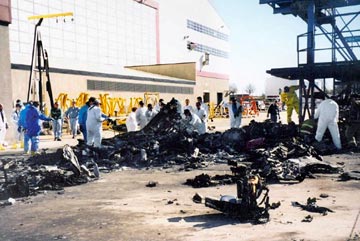 Investigators attributed a 2003 accident to faulty repair work on the tail section of an Air Midwest plane. Air Midwest had outsourced the plane’s maintenance checks to a West Virginia company that, in turn, outsourced to another company. (NTSB Photo) 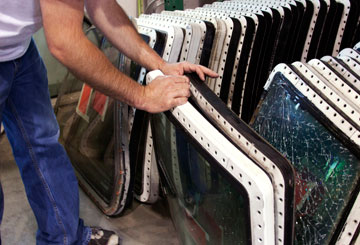 A worker sorts through shattered and broken windows from airplanes. The Pacifico Aero Tech repair shop in Kent, Wash., which is certified to work on U.S. planes, has a quarantine area for windows that are broken beyond repair. (Photo by Stevie Mathieu/News21) 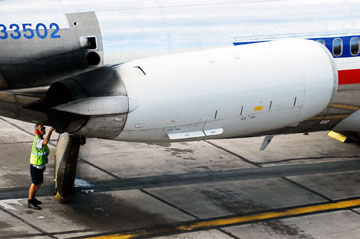 A member of an airport ground crew checks a commercial jet at Phoenix Sky Harbor International Airport in August. (Photo by Brandon Quester/News21)