“It seems weird to me that we have domestic certified repair stations, and because we don’t have as many of them anymore, because so many have been outsourced, there are FAA inspectors that hang out there, that are really looking over their shoulder,” McCaskill said during a 2009 Senate hearing on the issue. “And then you travel to Indonesia, and if there is ever an inspector that shows up … they aren’t even doing drug and alcohol tests.”

Goodrich, who has worked as an FAA inspector overseas, said language also is a barrier. Important information can be lost through a translator when inspectors question workers, and an inspector may not be able to tell if instructions written in other languages are comparable to repair manuals written in English. And sometimes translations of the manuals aren’t even available.

This was the case last year when US Airways Flight 518 traveling from Omaha to Phoenix had to be diverted to Denver because the pressure seal on the main cabin was leaking air. A mechanic at the Aeroman repair shop in El Salvador had put a part of the plane’s door on backward during a recent overhaul of the aircraft, according to a National Public Radio report.

“They’re getting verbal instructions from people… so you don’t know what you’re getting,” Goglia said. “Did he misspeak? Did somebody mis-hear?”

When each window comes in, one of two in-house inspectors checks for cracks, worn-out lamination and busted heating wires designed to prevent icing. They fill out a form then pass the window on to a mechanic, who fills out another checklist. That mechanic then sends the repaired part back for a final inspection.

Pacific Aero Tech receives regular inspections – about three or four times a year – from the airlines it services, and those audits are typically known in advance, said the company’s human resources manager, Danielle Stafford. In addition, inspectors from the FAA pop in about two or more times a year, often unannounced.

“Have we had surprise inspections? Absolutely,” Stafford said. “They’re allowed to come in at any time.”

The FAA checks to make sure repair manuals are current and that workers and parts inspectors are doing what they are supposed to do.

Farther north in the state of Washington, a hot spot for aircraft manufacturing and maintenance, a handful of workers at Aviation Technical Services circle an Alaska Airlines passenger jet just outside the hangar. Some climb into the cockpit. One worker climbs a ladder and pops his torso up into the tail of the plane. Other employees peer into the engines and circle the craft, papers in hand.

The business is one of the largest non-airline repair shops in the country. It is housed at the Paine Field Airport about 40 miles north of the state’s major commercial airlines hub, the Seattle-Tacoma International Airport. Planes can land at Paine Field and taxi right up to the hangar for service.

Aviation Technical Services, like many other large third-party maintenance shops across the country, would not permit a News21 reporter to take a tour to observe safety procedures.

Thousands of miles to the south, Mexicana workers leave their shifts at the maintenance facility at the Mexico City International Airport. The company provides outsourced repairs and maintenance to U.S. airlines. Mexicana officials would not allow a News21 reporter to tour the shop.

Workers at Mexicana must have at least a high school education and be able to pass challenging physical tests. One repairman, who did not want his name used because he didn’t have authority from his company to speak, said only about 80 percent of the repair manuals are available in Spanish and workers must ask for help if they have trouble understanding instructions written in English.

“All the manuals are in English … You need to have at least a basic knowledge of English,” another Mexicana employee said through a translator in July. He also said the facility knows at least one day in advance before an inspection by U.S. regulators.

When an FAA inspector finds something wrong at a foreign repair shop it’s difficult to yank that facility’s certification because of international politics, Goglia and Goodrich said.

“It is much more difficult for the FAA to enforce their rules and do what they do in the United States when a foreign country is involved,” Goglia said. “We don’t want to make them angry with us.” 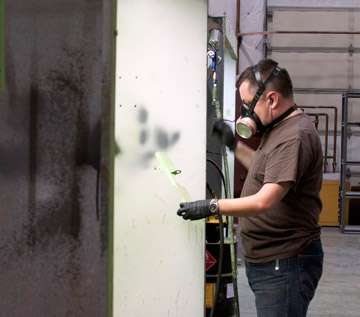 A Pacific Aero Tech worker paints part of a cockpit window at the Kent, Wash., shop. The small, third-party repair shop is certified to work on U.S. airplanes. (Photo by Stevie Mathie/News21) 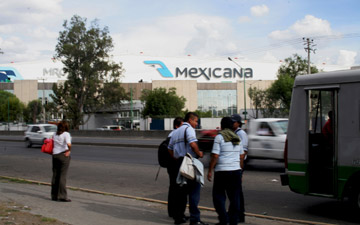 Employees of Mexicana, a large airplane maintenance facility at the Mexico City International Airport, prepare to go to work this June. Workers do heavy maintenance on U.S. passenger jets. (Photo by Stevie Mathieu/News21) 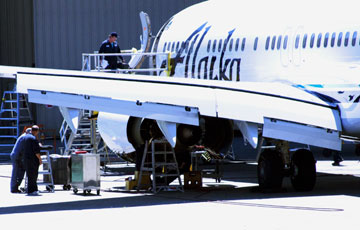