In 1991, a mechanic at a Turkish repair shop overhauled an engine on a U.S. passenger jet and missed a crack in the engine.

Four years later, on the evening of June 8, 1995, 57 passengers on ValuJet Flight 597 heard a loud bang as the plane bolted down a runway in Atlanta. Shrapnel from the busted engine ripped through a fuel line. The engine and cabin caught on fire. One crew member suffered serious puncture wounds from the shrapnel, and another crew member and five passengers suffered minor injuries.

Thousands of mechanics from all over the world work on U.S. commercial airplanes. Foreign repair stations are located in Canada, Mexico, countries in Central America and Asian countries such as China. Domestically, airplanes are repaired at large facilities in Mobile, Ala., Greensboro, N.C., and Everett, Wash., among many others.

Faulty maintenance, regardless of where the work is done, is the No. 2 cause of airplane accidents and safety incidents, second to pilot error and other operational errors, according to data compiled by the FAA.

A National Transportation Safety investigation of the ValuJet crash concluded that if the Turkish repair station had required the same rigorous record keeping as U.S. airplane maintenance facilities, the crack probably would have been discovered and the engine part replaced.

By 2001, safety regulators had come up with new rules that hold foreign repair stations to the same standards as domestic repair shops, but the rules applied primarily to the manner in which foreign shops filled out paperwork and kept records.

Now, lawmakers and aviation safety experts are raising new concerns about the outsourcing of plane repairs, especially to repair shops in other countries that are less closely supervised than domestic shops.

Safety advocates want Federal Aviation Administration inspectors to make more frequent visits to foreign repair stations to check the quality of work. They want measures to reduce drug and alcohol use at those far-off facilities. And they want the FAA to get a better handle on the growing number of repair shops in the U.S. and overseas that operate without FAA certification or inspections.

The FAA has not “prioritized looking at the issue, and I don’t think the American flying public realizes to what extent maintenance has been outsourced in an effort to cut costs,” Sen. Claire McCaskill, D-Mo., a staunch advocate for cracking down on foreign repair stations, said while questioning members of the aviation industry during a 2009 Senate hearing.

A News21 analysis of FAA data shows that about 15,000 accidents or safety incidents in all aviation travel can be attributed at least in part to inferior maintenance or repairs since 1973, when the FAA started keeping such records. In these accidents at least 2,500 people died and 4,200 were injured.

The analysis shows that at least 253 of those accidents involved commercial or chartered passenger planes and harmed people onboard. On those passenger flights, nearly 800 people died and more than 850 were injured.

When an airplane crashes or has a close call, it is the job of the National Transportation Safety Board to come up with ways to make the industry safer for passengers. But it’s up to the FAA whether or not to turn those recommendations into rules for the industry.

The FAA has failed to follow at least 37 of the NTSB’s 340 safety recommendations concerning airplane maintenance since 1967. Those safety suggestions include requirements for special training on complex aircraft parts and more frequent inspections of some critical parts.

A couple of decades ago, U.S. airlines repaired and serviced their own airplanes in the U.S. But by the late 1980s, when labor costs rose and rules about foreign airplane repairs relaxed, airlines began outsourcing maintenance to less expensive repair shops abroad. Since then, the work outsourced by U.S. airlines to foreign repair stations has increased steadily, said John Goglia, a former NTSB board member who now works as a transportation safety consultant. 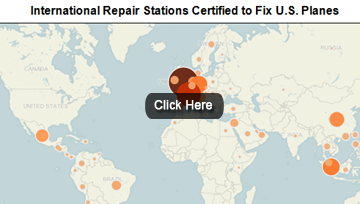 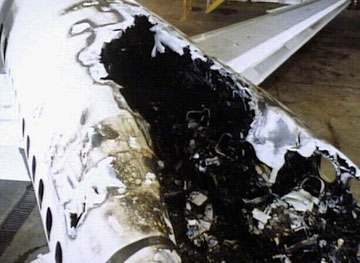 A 1995 engine fire on a ValuJet plane taking off from Atlanta was the result of inadequate maintenance inspection, according to a National Transportation Safety Board investigation. (NTSB Photo) 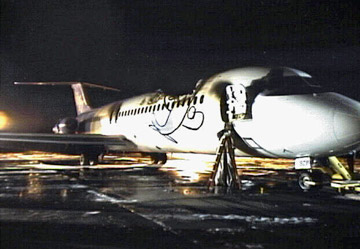 A ValuJet plane had been repaired at an overseas repair shop in Turkey a few years prior to an engine fire. (NTSB Photo)