“The potential is there to have a major accident with major loss of life and absolutely no recorders on board,” Cash said.

In 2002, the safety board’s recommendation made the NTSB’s “Most Wanted” list, which attempts to publicly nudge government agencies into compliance with the board’s most important recommendations. Since then, the NTSB updated its recommendations to include private jets and helicopters.

In a written statement, Laura Brown, FAA deputy assistant administrator for public affairs, said the FAA has significantly improved the quality and quantity of data that is collected from recorders already required on large commercial planes.

“The FAA’s position is that (these improvements) meet the intent of the NTSB’s safety recommendations for video recorders in the cockpit,” Brown said.

In addition, she said, three of the accidents that the NTSB uses to justify the need for video recorders, including EgyptAir Flight 990, occurred on foreign carriers and are not even subject to FAA oversight.

The FAA isn’t convinced that “there is a need to install cockpit image recording systems in commercial airplanes at this time,” Brown said in the statement.

The debate pitting pilots’ privacy versus passenger safety spans several decades. In the early 1960s, pilots unions agreed to the installation of audio recorders in airplane cockpits on the condition that recordings only would be used by crash investigators.

But union officials point to incidents in which black box audio was leaked to the news media. A TV newscast played audio from the cockpit of Delta Flight 1141, which crashed in 1988 at Dallas/Fort Worth International Airport, killing 14 and injuring 26. The audio, which includes the sounds of metal crunching and the screams of people on board, still can be found on the Internet.

“We don’t like to be scrutinized,” said Ron Nielsen, a retired US Airways captain. “If you could absolutely guarantee that the contents of that video recorder would be limited to the people that had a need to see it, the resistance would drop away. But this is the year of YouTube.”

The Air Line Pilots Association, the largest pilots union in the world with 53,000 members from 38 airlines in the U.S. and Canada, has spent $8.9 million lobbying the federal government since the NTSB made the video recorder recommendation, according to the Center for Responsive Politics’ lobbying database. The records don’t break out how much was spent on lobbying specifically against cockpit video recorders.

Repeated requests for an interview with union officials were denied. The union has previously told the NTSB that money would be better spent on creating “more robust” data recorders, which would record more information about a plane’s condition before an accident.

Video recorders already are used to keep an eye on operators in other transportation industries. This year, two train operators were investigated on suspicion of trying to block views of video cameras in their control cabs.

Airplane pilots have been known to disable recording devices, Cash said. There is a circuit in many airplane cockpits that, if shut off, will cut the power to the audio recorder, and in some airplane crashes pilots shut off that circuit before impact, he added. The NTSB wants circuits re-wired in the cockpit so pilots cannot disable black boxes as easily.

The FAA in 2006 outlined the minimum requirements for cockpit video recorders in case manufacturers want to start installing them. But that doesn’t mean the agency is any closer to mandating them in cockpits.

An altimeter, which pilots use to measure a plane's altitude, is part of the wreckage of a plane that went down in Montrose, Colo., in 1997. (Photo by AJ Maclean/News21) 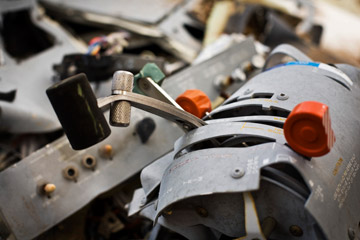 Crash investigators believe the pilot was holding onto this lever when the Montrose rash occurred. The lever, which is bent, is part of the debris from the plane that is now being studied in Arizona. (Photo by AJ Maclean/News21)