Fatigued drivers are included in the analysis because sleep apnea, a sleep disorder that interrupts breathing, is a common problem for commercial drivers. An estimated 36 percent of commercial drivers have the condition, according to the FMCSA. The agency encourages medical examiners to screen for sleep disorders and drivers with such disorders can be disqualified, but there are no strict requirements.

• A 2007 incident in Kansas in which a truck crossed a median on Interstate 135 and collided with an SUV carrying two women and their infants. One woman and her 10-month-old son were killed. The truck driver had been diagnosed with sleep apnea and was given a provisional medical card. When the card expired, he went to a different doctor and got fully certified, according to Amy Hanley, who was the assistant district attorney in Saline County, where the accident occurred.

• In 2004, a trucker veered into the left lane of Texas Highway 75, crossed the median and flew into the air, crashing into oncoming traffic. The truck hit an SUV carrying a family and a truck carrying roofers, killing 10 people. When police searched the driver’s briefcase they found three prescription medications issued to the driver while he was in Poland earlier that year, according to a NTSB investigation. The trucker said he had been taking medication for depression but had stopped because it made him drowsy. Less than five weeks before he had an exam and was issued a medical certificate.

• In 2000, a trucker on Interstate 40 in Tennessee collided with a state highway patrol vehicle, killing a state trooper. The truck then traveled across the median and hit a Chevy Blazer heading in the opposite direction, seriously injuring that driver. The trucker had been diagnosed with obstructive sleep apnea and underwent surgery to correct the problem but did not report either the diagnosis or the surgery during his medical examination. And NTSB investigation said the driver’s condition predisposed him to falling asleep behind the wheel. The investigation faulted the medical certification process for failing to detect the driver’s condition and allowing him to drive.

Rep. Jim Oberstar, D-Minn., said he is “very disappointed that FMCSA has allowed this situation to continue despite the overwhelming evidence that drivers are finding ways to circumvent the medical requirements for a Commercial Driver’s License.” He said he plans to put it on the legislative agenda for next year.

Maggi Gunnels, the FMCSA director of medical programs, said the agency understands that a comprehensive system of monitoring and tracking medical certificates is needed.

But getting there, she said, is complicated.

Over the past five years, 902,416 citations have been issued to commercial drivers who can’t prove they’re medically qualified, according to an analysis of the FMCSA Roadside Inspections Driver Violations database. That’s about 15 percent of the total violations issued at roadside checks.

Drivers who are caught using or in possession of drugs or alcohol are yanked off the road. The same is true for some – but not all – drivers who don’t have medical certificates.

Buses carrying passengers, for example, are pulled off the road if the driver doesn’t have a medical card. Those drivers “cannot leave the scene until the situation is rectified,” said Steve Keppler, interim executive director of the Commercial Vehicle Safety Association, a nonprofit organization that works on safety enforcement.

But the rules are different for truckers and others who don’t have passengers on board. While practices vary from state to state, truckers usually are issued citations and told to fix the problem at a later date. Then they’re allowed to drive off.

A trucker can pile up multiple tickets for the same violation and still be allowed to drive – at least until he goes to court, where a judge may decide to take him off the road.

Often, law enforcement officials have a hard time determining whether a medical card is valid. There is no central database of medical certifications. To check, an officer would have to call up the doctor who issued the certificate. Since commercial drivers travel all over the country, often at night, it can be next to impossible to reach a doctor at the right time, said A.M. Azbill, an officer with the Arizona Department of Public Safety. 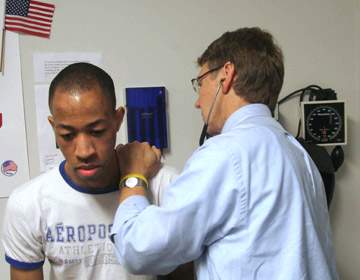