Azbill has never tried. “A lot of it you have to take on faith,” he said.

Any licensed medical practitioner can perform the DOT medical exam. That could be a doctor of medicine or osteopathy, a physician assistant, a nurse practitioner or a chiropractor.

In all, an estimated 400,000 medical practitioners can perform the exam for the more than 6 million commercial drivers, according to a 2008 FMCSA survey.

“To be honest, it’s bogus,” said Leo Gutierrez, a trucker from Moreno Valley, Calif. “You can go to any hospital or any mom-and-pop shop. If they really wanted to enforce it, half the guys wouldn’t be qualified.

“When they give an exam, I think sometimes they’re feeling sorry for us,” he added. “I’ve been to the $185 places and the $25 places, and they all give me the card.”

There is no program to train doctors on how to conduct the DOT exam. Some drivers go to their family physicians, doctors who may rarely conduct the exam, may not be up to date on current standards and may be reluctant to keep one of their patients from working, said Dr. Richard O’Desky of Akron, Ohio.

A trucker who wants to skirt the system altogether can go to the FMCSA website and download the Medical Examination Report for Commercial Driver Fitness Determination, a form that includes a driver’s health history and his exam results. The Medical Examiner’s Certificate, which drivers are required to keep in their possession, is also available on the Internet.

Doctors or drivers also can create and use their own forms. The only way to track whose signature and information is on the form is to call the number listed. There is no easy way to check whether the signature or information is authentic.

Neither is there a registry to track who is giving the exams or what the results are. If one doctor fails a driver, that driver can go from doctor to doctor until he finds one who will certify him.

This kind of “doctor shopping” is common, said Dr. Gordon Zellers of Akron, Ohio, a medical doctor who examines hundreds of commercial drivers each year. Zellers said he recently had to fail a trucker who had two tubes in his chest because of a breathing problem that could cause him to pass out while he’s driving.

“It blew the guy’s mind. He’d been driving for years and had never found a doctor that knew that,” Zeller said. “He told us right to our faces, ‘Well, I’m going to go to someplace else’ … and he’ll do that. And there will be no way for the other doctor to check it. Once they know the system and go doctor shopping they can get around a lot of things.”

The system has been so ripe for abuse that in 2008, the House Committee on Transportation and Infrastructure launched an investigation into medical certification of commercial drivers.

The House commissioned a Government Accountability Office study that found about 4 percent, or 563,000, of all commercially licensed drivers, were eligible for full disability benefits. It also found 15 specific cases of drivers who got medical certificates despite serious medical conditions, including a truck driver with an amputated leg who was deemed medically fit after he pushed his doctor around the room in a rolling chair and a bus driver with a breathing disorder who said he “occasionally blacks out and forgets things.”

Investigators working for the House committee also collected medical certificates during roadside inspections to see how many fraudulent medical cards they could find. They sent 614 cards to the doctors listed and determined that 7 percent were forged, according to a committee report. 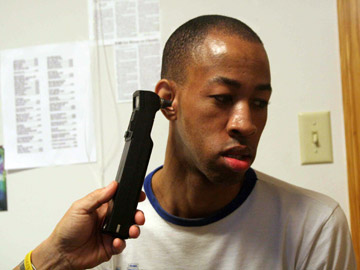 Rodney Blanks, a 29-year-old commercial van driver, gets his hearing checked during a Department of Transportation medical exam. (Photo by Ryan Phillips/News21) 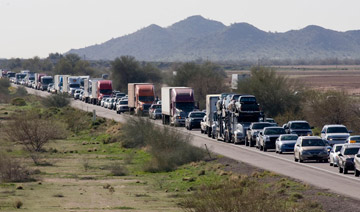 Drivers of commercial trucks and buses must have medical certificates that prove they are fit to drive, but the certificates are easy to get and easy to avoid. (Photo by Carlos Chavez/ The Arizona Republic)