Easy to Get, Easy to Ignore

Trucker Bob Caffee needed a medical card fast. His U.S. Department of Transportation medical certificate was to expire in two days, and he was in Southern California, halfway across the country from his regular doctor in Missouri.

So Caffee did what many drivers do: He headed to one of the medical clinics that have sprung up at truck stops across America.

The clinic in Ontario, Calif., where Caffee stopped is housed in a small, rundown building next to a Travel Centers of America truck stop. A sign advertises “DOT Physicals” next to a picture of a red truck.

“You go in there, and there’s a little girl sitting behind the desk, and you say, ‘I need a DOT physical,’ and she says, ‘OK, come back here and I’ll call the doctor,’” Caffee said.

The two of them checked his blood pressure, urine, breathing, hearing and vision. Caffee remembers that he had trouble reading past the top two lines of the eye chart.

“I told her I wear glasses, and she OK’d me,” he said, even though his driver’s license doesn’t say he’s required to wear glasses. The whole thing was over in 20 minutes, and Caffee emerged with a medical certificate that states he is healthy enough to drive a commercial truck for the next two years. Cost of exam: $30.

The exam Caffee underwent is required for all interstate commercial drivers. However, in many states, almost any health professional — including MDs and osteopathic physicians, chiropractors, physician assistants and advance practice nurses — can issue medical certificates for truck drivers. There are no training requirements and only minimal standards for what to check.

If a trucker is denied by one doctor, he can easily try another. Some download a medical certificate from the Internet and fill it out themselves.

Others don’t bother getting a medical certificate – genuine or false. Few are ever caught.

The problem of medically unqualified commercial drivers first drew national attention in 1999 when a bus driver veered off Interstate 610 near New Orleans, struck a guardrail, went through a chain-link fence, vaulted over a golf cart path and rammed into a dirt embankment, killing 22 of the 43 passengers on board.

The driver, who had a current medical certificate, had been in an out of the hospital the day before for treatment of his kidneys and was released less than eight hours before reporting to work, according to an NTSB report. Post-accident tests were positive for marijuana and an over-the-counter sleep medication that can cause drowsiness and dizziness. A passenger reported seeing the driver “slouch down” prior to the accident.

The accident prompted the National Transportation Safety Board to issue a series of stern recommendations in 2002 to the Federal Motor Carrier Safety Administration, whose primary mission is to prevent commercial motor vehicle-related fatalities and injuries.

Specifically, the board directed the FMCSA to “prevent medically unqualified drivers from operating commercial vehicles” and “establish a medical oversight program for all interstate commercial drivers.”

Mitch Garber, a NTSB medical officer, said the FMCSA’s response to the board’s calls for tougher medical standards has been disappointing. The agency has addressed a few problems, but the approach has been piecemeal and largely ineffective, he said. “It’s no more difficult for a medically unqualified driver to drive today than when the recommendation was made,” he said.

From 2002 when the recommendations were made through 2008, the last year for which data is available, there were at least 826 fatal crashes involving medically unqualified or fatigued drivers, according to a News21 and Center for Public Integrity analysis of the FMCSA Crash Statistics database. 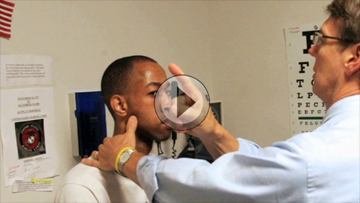 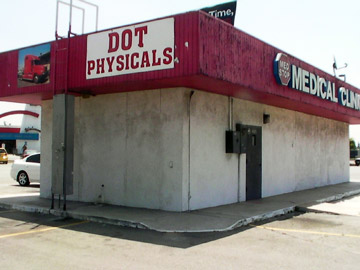 Truckers get medical exams next to a Travel Centers of America in Ontario, Calif. Medical clinics have sprung up at truck stops across the country. (Photo by Robin Schwartz/News21) 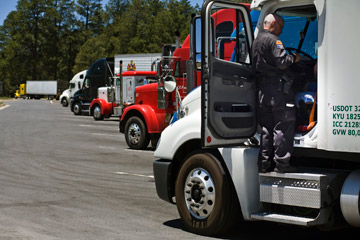 An officer with the Arizona Department of Public Safety talks to a trucker during a road check outside of Flagstaff, Ariz., on June 10, 2010. (Photo by AJ Maclean/News21)