According to statistics provided by the U.S. Air Force, the number of active-duty pilots staying in the military has been steadily increasing over the last 10 years. In 2000, there were 4,841 active-duty Air Force pilots ranked from lieutenant to lieutenant colonel, and in 2010 there were 5,740 — a 19 percent increase. The Air Force also provided attrition rates that show 1,280 pilots left the service in fiscal year 2007, but just 525 left two years later.

The Air Force expects a mere 240 pilots to separate or retire in 2010 – 81 percent fewer than just three years earlier.

The NTSB’s Hart said he worries about what will happen when commercial airlines no longer have a reliable flow of well-trained military pilots.

“We historically enjoyed a wonderful pipeline of military-trained pilots from World War II, then from the Korean War and then the Vietnam War,” he said. “We’re not ever going to see that pipeline again.”

The Airline Safety and Federal Aviation Administration Extension Act, signed into law this summer, has added to the worry about a potential pilot shortage. In the wake of a 2009 airline disaster near Buffalo, N.Y., lawmakers revised the minimum requirement for commercial pilot certifications. The legislation raises the experience required to be a commercial airline pilot from 250 hours to 1,500 hours within two years. The increase is expected to particularly affect regional airlines, where most young pilots begin their careers.

Roger Cohen, president of the Regional Airline Association, said setting such a high bar could discourage people from pursuing careers as pilots. “It’s like saying don’t even pick up a basketball unless you can be an NBA All-Star,” Cohen said. “It’s sending a message to young people today who are considering a piloting career — particularly with the cost of flying, the cost of training and the capital of it — that this is impossible.”

David Castelveter, vice president of the Air Transport Association, a trade organization representing major airlines, said the airlines haven’t seen a shortage of pilots and don’t expect to, in part because there’s a large pool of furloughed pilots to draw from. If a pilot shortage does develop, “it would be way down the line,” he said.

Cohen also doubts that a coming pilot shortage would have a big impact on the industry. “We’re confident our members will be able to navigate any perceived or real pilot shortage, just like we have done historically,” he said.

NTSB member Robert Sumwalt said airlines raised the retirement age three years ago for airline pilots from 60 to 65, which should forestall problems.

“I’ve been hearing about a pilot shortage now for about the last 30 years, and I have yet to see it,” said Sumwalt, who spent 24 years as a commercial airline pilot. “Raising the retirement age to age 65… will give us some time to allow the pipeline to get propped up again with pilots that want to be flying for a living.”

Despite repeated attempts over the course of several months, representatives of the world’s largest pilot union, the Air Line Pilots Association, declined interviews.

Over the past five years, many seasoned pilots have seen their pensions reduced and their pay slashed.

Shortly after Chesley Sullenberger landed a crippled Airbus 320 on the Hudson River in New York in January 2009, he told a House Transportation subcommittee: “My pay has been cut 40 percent; my pension, like most airline pensions, has been terminated and replaced by a (pension) guarantee worth only pennies on the dollar.”

“While I love my profession, I do not love what has happened to it,” he said. He added that he does not know “a single professional airline pilot who wants his or her children to follow their footsteps.” 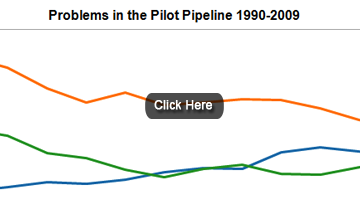 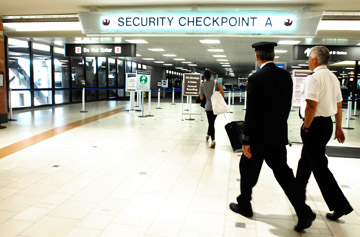