When Kevin Sullivan was 10 years old, he knew exactly what he wanted to be when he grew up.

The wide-eyed third-grader got to sit in the cockpit on his first-ever plane ride and reveled in the chance to rub elbows with the crisp professionals of United Airlines.

“It was a 707 – you know, a rickety old airplane,” the 54-year-old Sullivan said with a laugh. “At the time it was state-of-the-art. I got to sit on the observer seat, and I got a chance to talk to the co-pilot and the flight engineer and it was just, ‘Wow, this is what I want to do.’”

It was 1966 and commercial aviation was near the peak of its golden age. Young passengers were routinely invited into cockpits, and smiling flight attendants handed out hot meals. Those days are long gone, and so too, it would seem, are the wide-eyed third-graders who want nothing more than to defy the laws of gravity and fly big, shiny airplanes.

Being an airline pilot is no longer as glamorous — or as lucrative — as it once was, and as a result fewer people seem to aspire to the gold wings of airline captain. Some worry that a pilot shortage is on the horizon.

“I’ve seen enough (signs) to make me wonder about our future generation of pilots,” said
Christopher Hart, vice chairman of the National Transportation Safety Board.

Commercial airline pilots typically earn their wings by attending flight school or joining the military. There are signs of trouble in both pipelines.

Robert Rockmaker, president and CEO of the Flight School Association of North America, said the number of flight schools in the U.S. and Canada dropped from about 2,400 to about 1,700 after the terrorist attacks of Sept. 11, 2001.

“For six to 10 weeks, flight schools were closed across the country,” he said. “And some of these flight schools just didn’t come back. They went away, couldn’t make it.”

The number of students studying to become pilots has been declining for 20 years. According to data from the Federal Aviation Administration, there were nearly 129,000 student pilots in the system in 1990. By 2009, the number had plummeted 44 percent to just over 72,000.

While the loss of glamour in the industry may partly explain the thinning numbers of student pilots, the added burden of financing the training is another factor, Rockmaker said. Flight school for commercial airline pilot training can cost as much as $80,000. That often comes on top of loans for college degrees in engineering or other subjects.

Financing pilot training also has gotten more difficult, Rockmaker said. The G.I. Bill no longer pays for stand-alone flight training, and Sallie Mae, which is currently floating about $182 billion in private, educational loans, now only finances tuition for a handful of flight schools because of high default rates.

Rockmaker said the flight school association has been working with Sallie Mae on the funding issue but understands the decision. “Sallie Mae just said: ‘That’s it. We’re not going to continue this. The bleeding is too bad,’” he said. “Ultimately that’s any lender’s concern. ‘Am I going to get paid?’”

Patricia Christel, managing director of corporate communications for Sallie Mae, confirmed there are fewer loans available for flight schools and other career training programs. The loan provider ended up with a number of bad loans after 9/11 when many flight programs shut down, she said in an e-mail.

The traditional route to the large airlines begins at regional carriers, where the average starting salary is $24,000. Depending on interest rates, a loan payment could drain the lion’s share of a young pilot’s monthly paycheck. An $80,000 loan — at 8 percent on a 10-year amortization schedule — requires a $970.62 monthly payment, which would be nearly half the pre-tax monthly salary of a new pilot.

Meanwhile, more pilots are choosing to stay in the military rather than fly in the private sector, where pay and conditions are not what they once were. 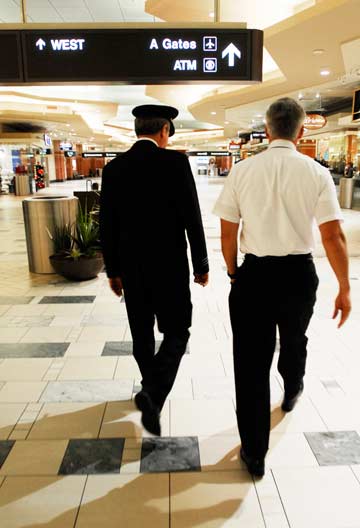 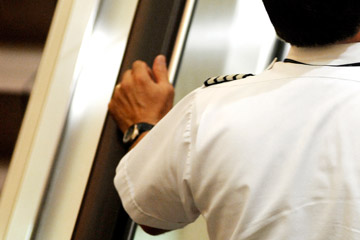 Above: Airline pilots walk through Phoenix Sky Harbor International Airport on Aug. 17, 2010. Some worry that a pilot shortage could develop in the next few years. (Photo by Brandon Quester/News21).