Many pilots no longer feel they have any job security, said Meryl Getline, a former captain for United Airlines who started flying commercial planes in 1977.

“A big thing with pilots, which is true to this day, is that wherever you’re hired, you might as well count on the fact that you’re going to get furloughed at some point,” she said. “I never did at United, but I did absolutely everywhere else.”

And in a seniority-based system, pilots who are forced to move from one airline to another take pay cuts. Highly experienced pilots may get no more than entry-level wages.

Retired pilot Ronald Nielsen of Arizona was in the Air Force in 1976 when he saw an Eastern Airline pilot’s pay stub. “He saw the delight in my eyes, and he said, ‘That’s not the best part, Ron. The best part: Three days on, four days off,’” said Nielsen, who retired from US Airways in 2007. “I’ve been chasing that carrot ever since.”

Pilots sometimes go a week without a day off, said Getline, who retired eight years ago to Colorado at the age of 49 in part because of the exhausting schedule.

“After 9/11, things started going downhill in a hurry, and they continued going downhill,” she said. “By the time I was done, I only had three days off a month. … There were a lot of things that entered into it, but I was exhausted.”

FAA spokeswoman Alison Duquette said the airlines suffered financially after the terrorist attacks and cut back on staff. “They’re still within the regulations, but in the past they were able to give (the pilots) a little more breathing room,” she said. “Today, I think they’re scheduled pretty tightly.”

Sullivan, that star-struck third-grader, eventually worked his way up from flight engineer to co-pilot and finally to pilot at American Airlines in 1984.

“It was the pinnacle of what I wanted to do,” he said. “Then I got in there and it was like driving a bus. … I got to the point where I was tired of it. I got tired of doing the same thing every single time I went flying.”

Sullivan flew commercial flights for about five years before switching to charter and corporate flights. He also worked briefly as a safety inspector for the FAA.

Like other pilots, he has seen dramatic changes in the industry. Pilots who used to get special privileges now eat sack lunches in the cockpit, sleep in crowded pilot lounges and go through security checkpoints just like everyone else.

“One of the biggest insults crews have to experience is going through security,” Sullivan said. “Think of the ridiculousness of putting the crew through security. If the pilot is going to crash the airplane, he doesn’t need a flashlight or a box cutter to do it.”

Retired pilot Nielsen pointed out that every cockpit is equipped with a fire ax. “That’s the joke,” he said. “Not to mention we’ve got the controls.”

Getline recalled a time in Honolulu when she had her screwdriver confiscated by security. “Well, I was a flight engineer; I wanted my screw driver. I needed it,” she said. “He wouldn’t give it to me.”

Other pilots remember when they used to be served the kind of meals that first-class passengers get. Now they’re more likely to eat peanut butter and jelly sandwiches in the cockpit.

“We don’t have crew meals,” said pilot Raymond Chase, 40, of Ohio. “The only way we get food is by buying it ourselves in the airport or eating the food on the airplane, which is crackers, pretzels and cookies.”

Malcolm Brenner, a human performance specialist at the NTSB, laments the changes.

“The public thinks of pilots as being wealthy, and suddenly here’s these pilots who can’t afford to live in New York who are sleeping in a pilot lounge and then talking about how uncomfortable they feel when they’re in icing conditions and about to land,” Brenner said.

“My God, has the industry gotten to that point?”

Getline said she knows a pilot who quit his job at US Airways to become a corporate pilot.

“And, by the way, he just got furloughed.” 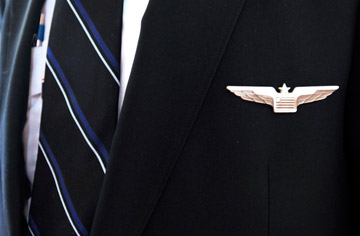 Some worry that a pilot shortage could develop, in part, because being an airline pilot is no longer as glamorous as it once was. (Photo by Brandon Quester/News21).