No One's in Charge
SIDEBAR: a tiny town still paying for accident.
Pages: 1 2 3

The positive train control that parked itself on the NTSB’s Most Wanted List for nearly two decades is more advanced. And it’s even more expensive. For that reason, the recommendations to install it went unheeded by railroad officials who didn’t think the safety benefits were worth the cost.

The price tag is formidable. The FRA estimates it would cost $5.4 billion to put a national system in place. Then there are the projected maintenance costs of hundreds of millions of dollars every year.

Positive train control could prevent approximately five passenger deaths a year, according to News21 analysis of FRA data. That makes it a very expensive technology based on number of lives saved.

The U.S. Department of Transportation uses a cost-benefit analysis to decide what safety measures to adopt. The analysis puts the value of a human life at $6 million.

“My family’s value is worth more than $6 million apiece,” Napier said, shaking his head from behind the cluttered counter of his hardware store on Main Street. “If a railroad makes a fatal mistake, they shouldn’t put a maximum value on a life.”

Within three years of the crash in Graniteville, the NTSB had investigated five more train accidents that positive train control could have prevented, adding 206 injuries, six fatalities and around $25 million in damage.

The FRA stuck to its conclusions that the untested technology just wasn’t worth the cost.

“Since the accrued safety benefits gained by the installation of PTC were far outweighed by the costs of installing the systems, FRA was unable to provide the necessary justification for mandatory implementation,” according to a statement provided by the FRA. The statement also said the FRA did not want to mandate a prototype technology that had not been proven to deliver the safety benefits the NTSB is seeking.

But when a 2008 Los Angeles Metrolink train crash killed 25, Congress decided to force the issue.

The commuter train collided head-on with a Union Pacific freight train during the afternoon rush hour. Both trains partially derailed, and the force of the collision rammed the front of the Metrolink train back into its first passenger car, crushing the riders.

Photos from the accident scene show hundreds of yellow-jacketed first responders swarming over the wreckage like hornets, trying to extract and help victims, whom they laid out on multi-colored tarps.

When a uniformed police officer was carried from the car, her silver badge bent from the force of the crash, rescuers stood at attention. Two of the men who died were survivors of a previous train accident on that same commuter line three years earlier.

The NTSB investigation revealed the engineer was too distracted by text messages on his cell phone to obey the signals to slow down and stop. After ignoring the final red light, the engineers would have had four or five seconds to look into each other’s eyes as they hurtled toward each other, too late to stop.

Had positive train control been in place, the train would have stopped automatically when the engineer didn’t respond to warnings to slow the train.

Within three weeks of the Metrolink disaster, Congress stepped in to do what the NTSB could not. It made positive train control mandatory.

The Metrolink accident “made clear the urgent need to fix our rail system and ensure the safety of passengers,” said Sen. Barbara Boxer, D-Calif., before the Senate passed the Rail Safety and Improvement Act of 2008 on a 74-24 vote.

Sen. Dianne Feinstein, D-Calif., who voted for the act, said it was long overdue.

“We have known for years that positive train control can prevent collisions and save lives, and the NTSB pushed for its widespread use for decades,” she said in an e-mail interview. “Yes, there’s a cost associated with it. But this will save lives while boosting public confidence in rail travel, so the costs are well worth it in my view.”

The act requires the installation and operation of positive train control systems on all intercity passenger and commuter railroad lines, the most heavily used freight lines and any railway that carries materials that are toxic or poisonous to inhale.

Railroad leaders were shocked when they learned they were being forced to put the technology in place by 2015 with little financial help from the federal government. 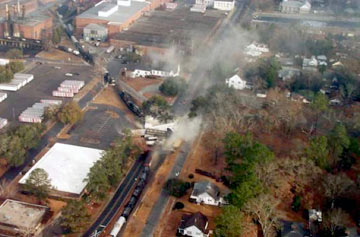 Chlorine gas was released during the train derailment in Graniteville, forcing the evacuation of nearly 5,000 residents. (NTSB Photo) 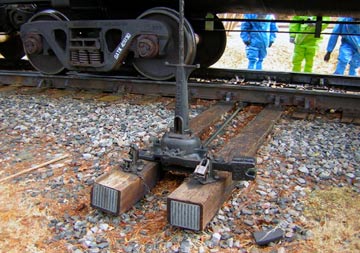 A turnout switch near the Avondale Mills factory was left in the wrong position, causing the Graniteville derailment, investigators said. (NTSB Photo)