No One's in Charge
SIDEBAR: a tiny town still paying for accident.

GRANITEVILLE, S.C. – This tiny mill town has a before, and it has an after. The two were split as crudely as the live oak tree on Main Street when the hot metal of a derailed locomotive severed it. Before that 2005 train wreck, Graniteville was dotted with azaleas and sweet gum trees. Horse Creek was full of channel catfish and redear sunfish, bluegill and black crappies.

The train was supposed to go straight through the center of Graniteville, past Johnny’s custom cabinet store and the First Baptist Church, before heading toward Columbia, S.C. But instead, a switch left in the wrong position by another crew caused the train to fork off the main track, toward the plant.

Engineer Christopher Seeling, 28, couldn’t tell that his train was being diverted off the main track until he was just a couple hundred feet from the split. It can take more than a mile to stop a fully loaded freight train.

Seeling frantically pulled the emergency brake, but it was too late. The train slammed into a parked locomotive, the metal twisting and sparking as 16 cars were thrown off the track. Diesel fuel pooled under the cars, kaolin powdered the bashed locomotives and tracks, and a 29-inch rip in the ninth car allowed liquid chlorine to gush out, mix with the air and turn into a lethal gas that killed nine people.

Plant workers who escaped, gasping their way through the poisonous fog, were joined at local hospitals by hundreds of other residents whose lungs were burning.

When volunteer Fire Chief Phil Napier arrived at the scene, he saw Seeling gasping and swaying by the wreckage as the chemical cloud rolled into the open window of his own truck. He called his wife and told her to take the kids and get out of town as fast as she could. In 90 minutes, more than 5,400 people would flee their homes.

“If you take poison and pour it in an ant bed, they just run for their lives,” Napier said. “That’s what we were doing.”

The devastating accident, from which Graniteville still hasn’t completely recovered, didn’t have to happen. It was preventable using a technology that the National Transportation Safety Board urged for 35 years until Congress finally stepped in and mandated it.

The board asked railroads to employ a form of automated train control as early as 1970 after a head-on collision between two commuter trains in Darien, Conn., killed four and injured 45. The Federal Railroad Administration considered it but decided that it was too expensive.

“Because of its costs and necessary extensive installation it does not appear possible at this time,” the FRA wrote in a 1972 letter to the NTSB.

In a safety recommendation letter to the FRA dated two years before the collision in Graniteville ever happened, then-NTSB Chairwoman Ellen Engleman Conners wrote that “Safety Board railroad accident investigations over the past 30 years have shown conclusively that the most effective way to avoid train-to-train collisions is through the use of positive train control systems.”

If a positive train control system had been in place, Seeling would have received a warning that he was approaching a switch that was directing him off the main track. He would have had plenty of time to confirm the train’s direction through Graniteville or stop the train. He could have avoided an accident that virtually destroyed a town.

The Federal Railroad Administration estimates roughly a third of all train accidents are caused by human error, exactly the type of mistakes positive train control can help avoid.

Positive train control is not a single piece of hardware but rather a system of equipment, communications and infrastructure that can prevent train collisions and derailments. The system is designed to precisely determine the speed and location of trains and warn crews of potential problems. If the operator does not respond to a warning, the train will brake automatically.

Some form of train control has been available as far back as the 1920s and was used on several lines until the national obsession with highway travel cut into railroad passengers and funding. The train control systems, which were expensive to maintain, languished and were largely discontinued. 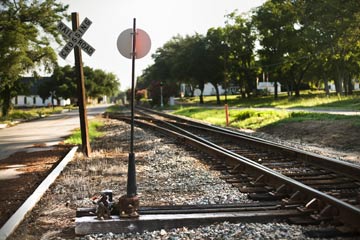 On Jan. 6, 2005, a freight train carrying chlorine gas derailed in Graniteville, S.C. The directional switch pictured here was in the wrong position. (Photo by AJ Maclean/News21) 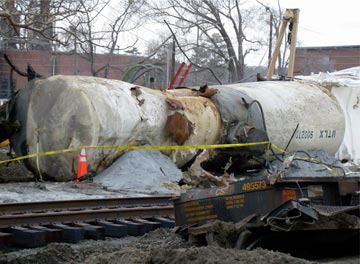 Chlorine gas was released when the locomotive of the train derailed. Nine people were killed. (NTSB Photo) 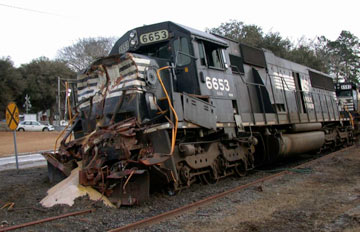 The National Transportation Safety Board said the Graniteville accident could have been averted if an automated train control system had been in use. (NTSB Photo)