No One's in Charge
SIDEBAR: a tiny town still paying for accident.
Pages: 1 2 3

At a recent rail conference in Vancouver, British Columbia, members of the American Public Transportation Association and industry experts debated the mandate and its likely effects on railroads.

Like most rail providers, Howard Permut, president of New York’s MTA Metro-North Railroad, wondered how his company could focus so much money and time on developing and employing positive train control without disrupting service. He said the costs of the mandate might force Metro-North to choose between charging higher fares and reducing customer service.

Gerald Hanas, general manager of the Northern Indiana Commuter Transportation District, said positive train control will improve safety, but he added that the rail industry needs financial help from the federal government to install it.

Hanas said the commuter rail industry, which expects to spend $2 billion on positive train control, would like the federal government to come up with half that and states the rest. Hanas traveled to Capitol Hill several times to convince legislators that outside funding is essential. So far, no such commitment is forthcoming.

The FRA is accepting grant applications for railroads that are struggling to put positive train control in place, with $50 million up for grabs in each of the next three years. But companies think more money should be available, along with federal tax incentives and credits.

Rail officials also are concerned about whether the technology is up to the task. As of 2009, there were 11 different types of positive train control being tested, and not all of them were working, let alone working together.

“There’s a lot of new technology, some of which is being invented as we speak,” said Gary Jarboe, maintenance director for Metrolink, one of the few lines that anticipate having positive train control in place before the 2015 deadline.

Then there’s the problem of radio frequency. The Association of American Railroads says there isn’t enough to go around for freight and commuter trains to use the same wavelengths. Without that, they won’t be able to communicate as they share tracks.

Other important questions remain unanswered. What if the satellites used to mange the onboard communications systems are disrupted? Will using automatic braking cause train delays since a human brain isn’t judging when to stop? By making it less important for engineers to pay attention, will they zone out while driving and neglect other tasks, like sounding the horn at dangerous crossings?

The challenge of positive train control is “first, do no harm,’” said David Turner, president of Turner Engineering Corp. “We know it’s possible; we know it can be done … (but) it’s a heck of a challenge.”

Supporters hope that positive train control will help the rail business. Better dispatching and spacing of trains could save railroads diesel fuel and create more reliable service, which might, in turn, encourage more shippers to use rail.

But these benefits are unproven and uncertain. And even if they do come to pass, it won’t be for at least 20 years.

By then, perhaps, the oaks that still grace the roadsides of Graniteville will have sprouted leaves once more. The junipers, azaleas and pines will have blossomed along the streets of what longtime resident Rob Lowe called a “small town with gentle people and pure hearts.”

After all, Lowe said, “all the pine needles turned brown, but it didn’t kill them.” 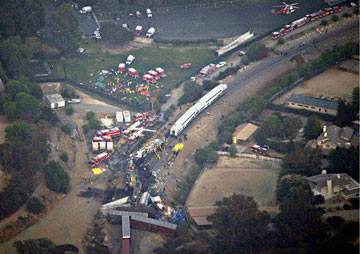 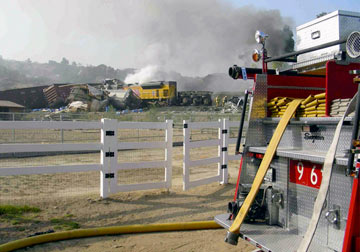 A Metrolink Commuter train and a Union Pacific freight train collided near Chatsworth, Calif., in September 2008. NTSB investigators concluded the engineer was too distracted by text messages on his cell phone to obey the signals to slow down and stop. Had positive train control been in place, the train would have stopped automatically when the engineer didn’t respond to warnings. (NTSB Photo)