In July, the FMCSA received the GAO report and the names of five of the companies suspected of reincarnating, Azteca Bus Line was not one of the five because the FMCSA had already ordered it out of service.

That same month, however, the FMCSA began asking questions about Martinez’s connection to other companies. Martinez did not respond to investigators’ questions. His buses were still on the road.

On March 5, a Tierra Santa Inc. bus set out from Jerez, Zacatecas, in central Mexico, headed for Los Angeles.

About 30 miles south of Phoenix, the bus rear-ended a pickup truck on Interstate 10, swerved across the highway and hit the dirt shoulder of the road. It tipped onto its side and slid 80 feet before rolling over and landing upright.

The tumble caved in the sides of the bus, flattened part of the roof and shattered the windows. Nine passengers were thrown from the bus. Six of them died. The highway became a triage area for the 14 surviving passengers and two drivers, with motorists stopping to help people whose injuries ranged from head traumas to spinal fractures and broken ribs.

The accident generated attention from CNN, USA Today and others when it was learned that the bus was operating illegally. A police report indicated that the driver did not speak English, there was no record of driver hours in the previous seven days, the driver carried a fake insurance card and the vehicle had defective brakes.

This time, federal officials moved aggressively against Martinez. The U.S. Department of Transportation went to U.S. District Court in California asking for a court order to shut him down.

In a consent decree Martinez signed in March of this year, he agreed that he would no longer operate his business without federal authority.

Martinez still owes $72,760 for a total of 78 violations accumulated over four years, according to federal documents. FMCSA officials wouldn’t say whether they plan to take civil action to recoup the fines.

Spokeswoman DaRonda McDuffie did say, however, that while the FMCSA appreciated the GAO report on reincarnated carriers, the agency’s action “against Tierra Santa Inc., its owner and the four motor carrier companies allegedly used was a direct result of FMCSA’s thorough investigation and subsequent charges.”

Tierra Santa Inc. is no longer the name of the business that operates out of the company’s old headquarters in Van Nuys. A new sign above the door reads “Autobuses Jerezanos.” Jerezanos refers to a part of central Mexico where the buses travel.

Autobuses Jerezanos’ brochure advertises the same L.A.-to-Mexico route, uses the same bus stops and lists the same addresses as Martinez’s old Tierra Santa Inc. and Azteca companies. It also has a website that lists a phone number for its company headquarters. The number is the same one that Martinez included in his FMCSA registration papers for Tierra Santa Tours.

Autobuses Jerezanos does not appear on the list of companies that have FMCSA permission to operate.

A man answering the phone told News21 that it was the correct number for Martinez but that he was out of town and unavailable to speak.

A woman working at the counter said she had worked for Tierra Santa for four years but that the companies are not the same.

“This is not the company Tierra Santa; it is another company,” said the clerk, who did not want her name used because she did not have permission from her employer to speak. “Tierra Santa had an accident and closed down; this is a new company.” 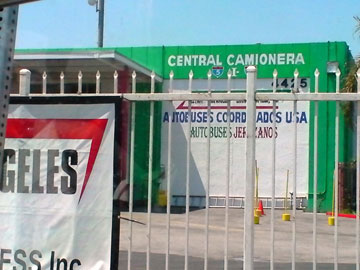 This storefront in Los Angeles has been the home of two bus companies – Autobuses Jerezanos and Tierra Santa Inc. (Photo by Robin Schwartz/News21) 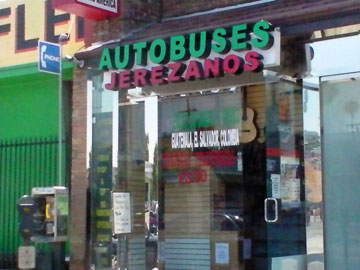 Autobuses Jerezanos advertises the same L.A.-to-Mexico route, uses the same bus stops and lists the same addresses as Tierra Santa Inc., which was ordered out of service by federal authorities. (Photo by Robin Schwartz/News21)