Numerous attempts to reach Martinez by phone, e-mail and mail were unsuccessful.

After the Tierra Santa Inc. accident, Mario Garcia, the owner of East Valley Safety Associates, the company Martinez referenced in one of his applications to the FMCSA, said he received a subpoena for his records.

Garcia said he talked to investigators and told them that Martinez had three buses, one that was involved in the accident near Phoenix and two that were still operating.

“I told the FMCSA that the company is still operating,” he said. Investigators asked him if he could find the buses and take photos for them.

“My job isn’t to do their work,” he recalled responding.

The FMCSA provided a summary of actions taken against Garcia but did not agree to interviews about the case.

Garcia said he has never actually met Martinez but he did help Martinez apply to get his company registered with the FMCSA, just as he does for many other companies.

Garcia has hung a framed newspaper clipping from the Tierra Santa Inc. crash above his desk. He points to the clip and says he tells prospective owners: “You have two options: First, you can pay the insurance and everything. Second, you can do like this, like it shows in this newspaper.”

In the end, he said, the second option is much more expensive, but ultimately it’s the owner’s choice.

“I don’t want a company to carry passengers if it is unsafe,” Garcia said. If he discovers that a company is operating without insurance, he said he notifies the FMCSA himself.

The problem, he said, is that there are a lot of incentives for companies to skirt the rules. Paying insurance and maintaining vehicles to federal standards can average $150,000 a year for a small bus company, he said.

Garcia said Martinez did what many companies do to get registered: “He put down the down payment, paid three months and then canceled the insurance.” Why? “Because it’s a lot of money,” he said.

More than 20 companies, many with poor safety scores and unpaid fines, have used the East Valley Safety Associates address, phone number and e-mail to register for operating authority, according to FMCSA’s database of violations from 2007 to 2010.

One business, Almar Co, registered at the East Valley Safety Associate’s address, received three separate fines totaling more than $36,000 in 2008 and 2009 for violations that include operating illegally, allowing a driver to drive more than 10 hours at a time and driving without a valid commercial driver’s license. It was ordered out of service July 17, 2009.

In the same month, a new company, Almarco, popped up with the same address and phone number and filed for authority to operate a passenger bus. Almarco subsequently received three violations for brake issues and maintenance problems and was ordered out of service this past March.

Garcia said he knows some of the companies that come to him have spotty safety records. “I am like a doctor; the reason that companies come to me is because they need help,” he said.
When he knows that a company is operating illegally, he said he offers to share that information with the Department of Transportation.

A Bus to Mexico

Two buses pull up in front of Autobuses Jerezanos early on a Sunday morning in July. A half-a-dozen groggy passengers who have been waiting on the sidewalk grab suitcases and get ready to board.

The signs on the buses say “Holy Spirit Tours,” a company that is registered with the FMCSA but has been cited for drivers who have consistently failed to keep track of their hours and for buses with steering and brake problems. The FMSCA has given the company a deficient safety rating of 99.36 out of 100, with 100 being the least safe, although it has not been taken out of service.

Truck driver Rudy Garcia accompanies his elderly, wheelchair-bound father, who is heading for a small town in Zacatecas, Mexico. Garcia said he’s heard about Tierra Santa’s accident in Arizona, but it doesn’t worry him.

“My mother in-law travels on these things back and forth to Mexico four times a year; my dad does it twice a year,” he said. “I think everything is well maintained; they stay on top of their buses. They take all the safety precautions they can.” 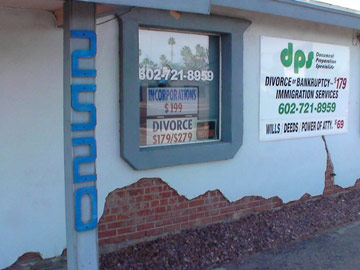 More than 20 companies are registered with the Department of Transportation using the address of East Valley Safety Associates in Phoenix. The company helps truck and bus companies obtain permission to do business with the federal government. (Photo by Robin Schwartz/News21) 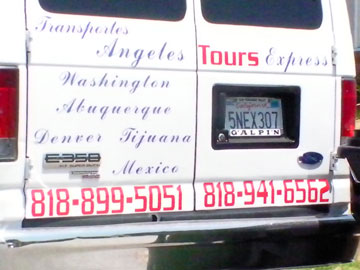