Cayetano Martinez started Tierra Santa Tours in 2006 with a few buses to take passengers back and forth from Los Angeles to Zacatecas in central Mexico.

In the first year of operation, Martinez’s company racked up at least 11 safety violations from the Federal Motor Carrier Safety Administration. They included failure to test employees for drug use and failure to keep records of drivers’ hours and qualifications and vehicle inspections, among other items.

In 2007, the FMCSA ordered the company’s buses off the road until the problems were fixed. When Martinez still hadn’t done that nine months later, the agency pulled his federal authorization. His company was out of business and facing fines of $7,620.

But that didn’t stop Martinez. He simply re-registered his business under a new name and kept his buses on the road, records show.

He would do the same thing two more times before the FMCSA caught up with him – and that happened only after a devastating bus crash in Arizona earlier this year. And still there are indications that Martinez has not completely quit the business.

News21 reconstructed the history of Tierra Santa Tours and Martinez’s other companies through a notice of claim letter the FMCSA sent to Martinez; the agency’s databases for motor carrier registrations and violations; a Government Accountability Office report; police records; interviews; and visits to the sites of several of his companies.

After being shut down the first time in 2007, Martinez registered a new company with the FMCSA. This one was Cayetanos Bus Line Inc., with a location listed in Van Nuys, Calif., just outside of Los Angeles, and a mailing address and phone number in Las Vegas.

Six months later, in August 2008, the company lost its insurance and the FMCSA told it to stop transporting passengers.

Martinez registered in June 2008 under a different name: Azteca Bus Line. The company’s address was the same as that of Cayetanos Bus Line. Martinez also gave the FMCSA a phone number and mailing address in Phoenix for a consulting company by the name of East Valley Safety Associates. That company advertises itself as a consultant on motor carrier safety, helping bus companies register and fill out paperwork for the FMCSA.

By 2009, Azteca Bus Line, too, ran into trouble with federal agents. It was fined $2,130 for lack of insurance after one of its buses was checked at a roadside inspection in California. When the company didn’t pay, the FMCSA issued an out-of-service order, meaning the company no longer had government permission to operate.

Meanwhile, Martinez had begun operating another company – Tierra Santa Inc., a name close to that of his original company. The company’s address was the same as that Martinez had given for Cayetanos Bus Line Inc. and Azteca Bus Line: 14416 Victory Blvd. in Van Nuys, Calif.

In July 2009, one of Tierra Santa Inc.’s buses was involved in a minor accident on Interstate 10 in western Arizona. The company was cited because the driver did not speak English, according to the FMCSA violations database.

Tierra Santa Inc. was cited twice more. In August 2009, a driver was stopped in Texas and ticketed for operating illegally. And in September of that year, the company got another minor citation in New Mexico for lighting problems on a bus.

In December 2009, the FMCSA formally rejected Martinez’s application to operate Tierra Santa Inc. and told Martinez he was not authorized to transport passengers. The agency did nothing else to make sure that Martinez was no longer operating his buses.

A GAO report on reincarnated carriers issued six months earlier included this reference: “The owner of a Los Angeles motor coach company registered a new carrier using the same Social Security number, business name, phone number, fax number and company officer as the old one.” The report also stated that an investigator had visited the carrier’s new business and found “several brochures and business cards for the old carrier were displayed on the store’s counter.”

The report refers to 20 companies suspected of reincarnation but does not name them. However, a congressional staff member provided the list of the reincarnated companies to the Center for Public Integrity and News21. It includes Martinez’s company, Azteca. 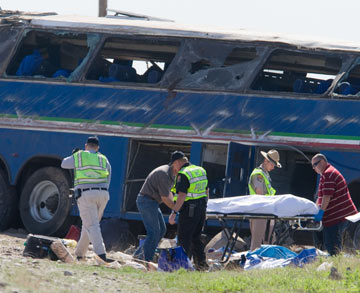 Six people died when a Tierra Santa Inc. bus flipped over along Interstate 10 south of Phoenix in March. The bus company had been ordered out of service for safety violations. (Photo by The Arizona Republic/Pat Shannahan) 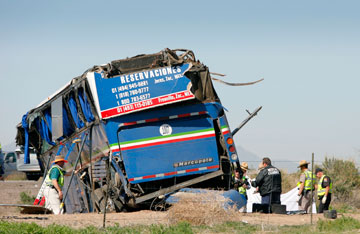 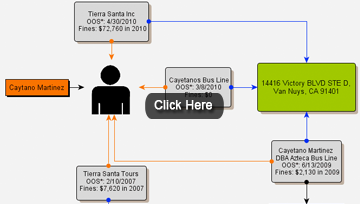