Among the fiercest opponents is the Passenger Vessel Association, the country’s largest passenger boat trade association.

“It’s hard to explain to them the value of a written document when they’re on their vessels every day,” she said.

When accidents do happen, companies react, Gedney said. For example, after the 2003 Staten Island ferry accident the company adopted a safety management system much like the one the NTSB recommends, she said. Many other large operators have done the same.

Gedney also argued that forcing safety management systems on smaller companies would be financially crippling for many.

Spencer said the Coast Guard has been too quick to buy industry arguments.

“They agree with what the PVA is saying and that’s the end of the story,” he said. “There really hasn’t been an effective dialogue on this.”

The Coast Guard, which is part of the Department of Homeland Security, didn’t respond to numerous requests for interviews.

If the NTSB could prove that safety management systems significantly decrease accidents, it might be easier to persuade the industry to get on board. But there are few hard numbers. The safety board has relied mostly on anecdotes and educated guesses about how many accidents could be avoided.

“It’s hard to measure the success of a program if you’re basing it solely on the accidents that you did not have,” NTSB board member Robert Sumwalt said.

Vessels that operate on international waters have been subject to a safety management code since 1998. While almost everyone agrees that the code has helped reduce the number of accidents, there is no central reporting system.

Besides, accidents may be down because of recent technological improvements and other safety measures, said James Scheffer, chief of the NTSB’s marine investigative division.

It took a catastrophic 1987 ferry accident off the Belgian coast to shock the international industry into adopting the code. Crew members forgot to close the bow doors and water rushed on board the boat, which was already weighted down with water for ballast. Almost 200 people died when the ferry capsized.

That accident was so distressing – and got so much publicity – that the International Maritime Organization, the international marine regulatory agency, adopted the safety code without waiting for member support.

“There was no universal buy-in by any stretch of the imagination,” said Daniel Sheehan, a former Coast Guard official. But, he said, as it “becomes more and more a part of the way of life on ship and more and more folks have grown up with it, I think it’s proven its worth.”

Rather than wait for a catastrophe, the NTSB is trying to bolster its case that safety management systems are needed for domestic ferries and passenger vessels.

Spencer said that soon investigators will ask a few more questions after every marine accident: Did the company have a safety management system in place? If not, could the accident have been prevented with one?

“We just really haven’t gotten very far with the moral argument that it’s a good thing and they ought to do it,” Spencer said. “What I have to do is make a better case and make it harder for the Coast Guard and the industry to say that they don’t have a need for it.” 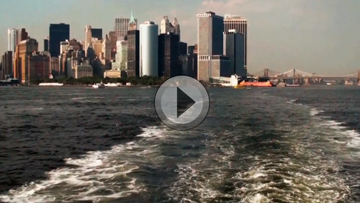 VIDEO: Kathy Healy, whose husband was killed in 2003 when a ferry slammed into a maintenance pier on Staten Island, N.Y., describes how her life has changed. 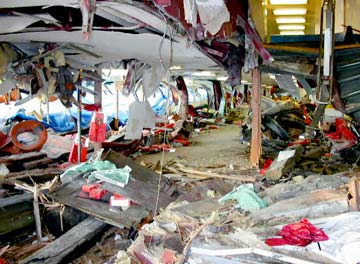 Life jackets are among the twisted metal and debris strewn throughout a Staten Island ferry that ran into the St. George Terminal pier in 2003. The accident injured 70 people and killed 11. (NTSB Photo)

A Staten Island ferry employee holds a passenger gate as the ferry heads toward port this July. (Photo by AJ Maclean/News21)