“A Culture of Safety”

If safety management systems are ever going to work, the very culture of the boating industry has to change, safety experts say.

Too many companies still don’t think about safety until an accident happens, Spencer said.

“It starts from the top, and it really is a cultural thing,” he said. “As with any cultural changes, it takes a lot of time for this sort of thing to happen.”

Doug Rabe, who spent more than a decade in the NTSB marine safety office and more than two decades with the Coast Guard, said regulations alone will never be enough. Safety systems need to be cost-effective, and they need to be flexible.

For a major cruise line, a manual might take thousands of pages, but for a mom and pop towboat company, it may need to be only a few pages, he said. More than that and resistance mounts.

Randall said he hopes the CEO of a large passenger vessel company will go public with support for safety systems and lean on other companies to follow suit.

“That needs to happen, as opposed to government shoving requirements that everyone is going to try to throw back out,” he said. 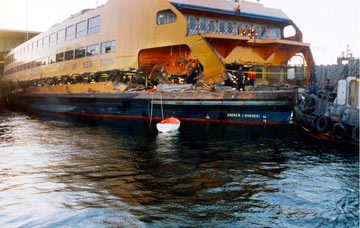 Police officers and first responders walk among the wreckage of a Staten Island ferry that ran into a pier at the St. George Terminal in 2003. The accident injured 70 people and killed 11. (NTSB Photo) 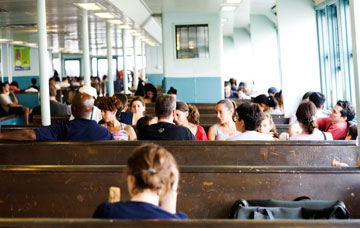 Passengers ride a Staten Island ferry from the island to Manhattan in July. After the 2003 crash, the ferry system adopted a safety management system similar to the kind that the NTSB has been recommending for years. (Photo by AJ Maclean/News21)