Towboat operators are much closer than ferries to embracing the kinds of safety systems the NTSB advocates, and cruise lines already have taken that step. In both cases, major accidents provided the spark.

In 1993, barges being pushed by a towboat near Mobile, Ala., hit a railroad bridge, knocking it askew just minutes before a train crossed. The train derailed and several of its cars fell in the water and caught fire. Forty-seven people died and more than 100 were injured.

The accident prompted a re-examination of the industry’s safety standards, said Jennifer Carpenter, senior vice president for national advocacy at American Waterways Operators, which represents about 80 percent of towboat operators.

The association worked with the Coast Guard to develop a safety management system that was introduced in 1996. Four years later, the association stopped accepting members that did not comply.

At first, some members threatened to pull out, but only 13 did, Carpenter said. And companies have seen a payoff in lower insurance rates and fewer accidents. The number of accidents in the towing industry dropped from a peak of 2,000 in 1996 to 1,500 in 2009, according to Coast Guard statistics.

Congress passed legislation in 2004 that would require safety management systems for towboats, but the Coast Guard is still waiting on approval from the Department of Homeland Security to enforce the new rules.

For cruise lines, the turning point came after a series of accidents and environmental problems, said Peter Randall, who worked for Norwegian Cruise Lines from 2001 to 2009. The company was caught pumping oily water into the ocean and failed a Coast Guard inspection because of a faulty sprinkler system.

Cruise lines already had safety management systems in place – required because they operate in international waters – but that doesn’t mean they were following them, Randall said.

“You said you had a safety management system. It was a sham,” he said.

After the incidents, companies got much more conscientious about enforcing the rules, partly because of concerns that bookings would drop if people believed cruise ships were unsafe, Randall said.

Ferry systems don’t have the same concerns about losing business that cruise lines do.

“With the ferry industry, I can’t go anywhere else with my dollar. I don’t have a lot of choice,” said Randall, who worked with the Cape May-Lewes ferry system that runs between New Jersey and Delaware before moving to Norwegian Cruise Lines.

More than 65,000 people use the Staten Island ferry each weekday, many to get to and from jobs in Manhattan.

Today, a description of the ferry system’s safety management system is displayed prominently on every boat, and its compliance is evident in the way it operates. But before the 2003 accident, things were much different, longtime commuters say.

Loudspeaker announcements were hard to hear or nonexistent. Barriers to prevent people from falling overboard were missing on some parts of boats. Coast Guard and fire officials were rarely seen on board.

“Before the 2003 accident, it was obvious that safety wasn’t a top priority,” said Norman Serafin, a Staten Island resident who has been taking the ferry to work since 1983. “It would have kept on going that way without the accident. (But now) everything’s controlled.” 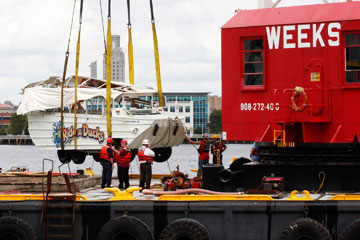 A large crane lifts a tour boat out of the Delaware River after it was struck by a barge. The July accident resulted from a series of malfunctions and errors – the kind safety management systems are designed to address. (Photo by Ariel Zirulnick/News21) 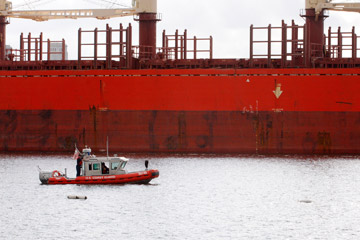 A U.S. Coast Guard boat circles the site of the Delaware River accident. The river is a busy place for both recreational and commercial freighters. (Photo by Ariel Zirulnick/News21) 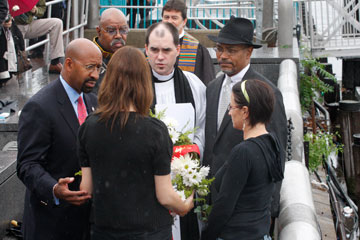 Philadelphia Mayor Michael Nutter comforts two women at a memorial service for two Hungarian students who were killed in the July accident. (Photo by Ariel Zirulnick/News21)