Like most accidents, it wasn’t just one thing that went wrong when a barge rammed into a tour boat on the Delaware River in July, killing two.

First, the engine malfunctioned on the duck boat, an amphibious craft popular with tourists visiting Philadelphia. The boat’s master turned off the engine, dropped anchor and waited for help.

Then a towboat guiding a 250-foot barge down the river failed to change course, even as it bore down on the duck boat anchored in the channel.

The master of the duck boat radioed the towboat to change course, but there was no response. He told accident investigators he picked up an air horn in a last-minute attempt to get attention but the horn didn’t work.

When the collision occurred, some of the 37 passengers who landed in the water had their life jackets in their hands or had none at all.

The series of mistakes led to the deaths of two Hungarian students who were visiting the U.S. on a faith-based exchange program. Their bodies were found in the river two days later.

Eight years ago, the National Transportation Safety Board recommended that passenger boats implement safety management systems to decrease the chance of accidents like the one that happened on the Delaware. A safety system is essentially a checklist that covers everything from crew training and equipment maintenance to what to do in case of an emergency. It provides a regimen for inspecting and operating boats that is meant to reduce human errors.

The recommendation grew to include passenger ferries after a high-profile accident in 2003 in which the Staten Island ferry Andrew J. Barberi crashed into a pier, killing 11 and injuring 70. That same ferry crashed into another pier in May, injuring 37. The latter accident is still being investigated.

It expanded to towboats in 2007 after workers on a towboat in Louisiana failed to secure a 5-ton steel shaft that slipped from its place and struck an underwater gas line. The resulting fireball consumed the towboat and the barges it was pulling, killing the towing vessel’s master and four barge workers.

All of the accidents involved people making mistakes, which account for as many as 80 percent of all marine accidents, according to the U.S. Coast Guard.

Since the NTSB recommended safety management systems in 2002, there have been about 1,700 accidents involving domestic passenger vessels, according to a News21 analysis of Coast Guard records. Safety board investigators believe many of them would have been prevented if safety systems had been in place.

In February, the safety board bumped up its recommendation on safety systems to its “Most Wanted” list, marking it as a top priority of the marine safety division. It is the only marine-specific recommendation on the federal list.

What the NTSB wants is a document that outlines safety and operating standards that must be met every time a boat goes in the water, said Jack Spencer, director of the board’s Office of Marine Safety. A Coast Guard official or authorized third party would do spot checks to monitor compliance. If safety problems are discovered, a company would be penalized.

Last year, the Coast Guard proposed rules that would require passenger ferries that carry more than 399 passengers to have safety management systems. But it balked at going further, in part because the boating industry doesn’t support the measures. 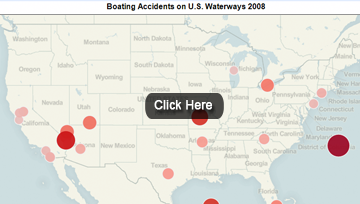 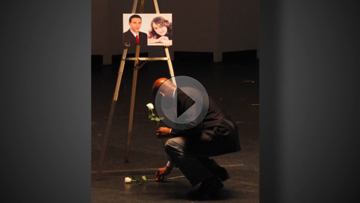 VIDEO: On July 7, 2010, two Hungarian students were killed when a barge ran into their tour boat on the Delaware River in Philadelphia. First responder Lt. Andrew Napoli of the Philadelphia Police Department describes what happened. 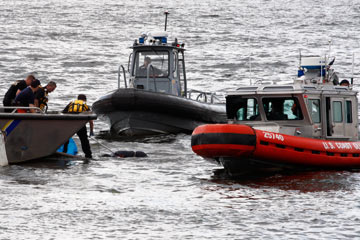 Bystanders were the first to notice the body of 20-year-old Szbolcs Prem drifting downstream after the July accident. (Photo by Ariel Zirulnick/News21)