Napping in the Cockpit

Accidents happen in a matter of seconds.

An airplane pilot takes a moment too long to react in an emergency. A trucker who has been on the road all day wanders across the median. A train engineer is lulled to sleep by the isolation and monotony of the job and misses a signal.

It’s impossible to say how many accidents are caused by operators who are just too tired to do their jobs, in part because fatigue can’t be measured like the level of alcohol in a person’s system. But fatigue is frequently cited by investigators as a factor in accidents in the air, on the water and on railways and highways.

Over the past four decades, there have been more than 320 airplane accidents and incidents related to fatigue, and nearly 750 people have died, according to an analysis by News21 and the Washington-based Center for Public Integrity, a nonprofit investigative journalism organization.

The National Transportation Safety Board, created in 1967 to help safeguard U.S. travelers, has been trying since its inception to persuade federal agencies, industries and states to take steps to reduce the likelihood of these kinds of accidents. The board has issued 138 fatigue-related safety recommendations. Only 68 have been implemented, according to the analysis.

Some of the proposals are still pending decades after they were issued. In other cases, the board has simply given up on its recommendations ever being adopted, declaring those cases “closed unacceptable.”

Many of the recommendations that have been implemented tend to be modest, such as handing out brochures about fatigue or requiring pilots to sit through a 30-minute training video. Meanwhile, major areas of safety regulation have gone unchanged for decades. A regulation that pilots can fly no more than 1,000 hours in a single year hasn’t changed since 1935.

That was the year that a Washington-bound TWA flight carrying 11 passengers plummeted from the sky and crashed into a muddy field outside of Atlanta, Mo. The pilot and four passengers, including U.S. Sen. Bronson Cutting of New Mexico, died.

In a memo about the crash investigation, Department of Air Commerce Director Eugene L. Vidal called for a government study of fatigue. The letter is the first known mention of fatigue as a concern in aviation safety.

Fifty-five years and dozens of government studies and reports later, the NTSB listed fatigue on its inaugural “Most Wanted” list — recommendations that the safety board believes are the most critical.

Today, fatigue remains on the list, one of just four of the original items that have never been addressed to the board’s satisfaction.

“We need to quit talking about fatigue and we need to start trying to do something about it,” said NTSB board member Robert Sumwalt.

“We are going to continue doing all that we can to make sure roads, skies and rails are as safe as possible for travelers,” he said.

NTSB does not track fatigue-related highway accidents on a regular basis. But in 1993, the board commissioned a study expecting to learn about the effects of drugs and alcohol on trucking accidents. Investigators studied all heavy-trucking accidents that year and made an unexpected discovery: Fatigue turned out to be the bigger problem.

The study found 3,311 heavy truck accidents killed 3,783 people that year, and between 30 percent and 40 percent of those accidents were fatigue-related.

“Truck drivers drive more hours in a week than pilots fly in a month,” said Jacqueline S. Gillan, vice president of Advocates for Highway and Auto Safety. “Drivers are paid by the mile — that’s an incredible incentive to drive as far and fast as you can.”

The NTSB also found that more than half of all single-driver trucking accidents occurred in the earliest hours of the day when the fewest number of cars are on the road: between 2 a.m. and 6 a.m. Three-fourths of those early morning accidents were found to be fatigued-related.

NTSB has issued 34 recommendations regarding fatigue on the nation’s roads. Only 17 have been followed. One of the outstanding recommendations is a call to equip buses with data recorders that can track drivers’ hours of service. 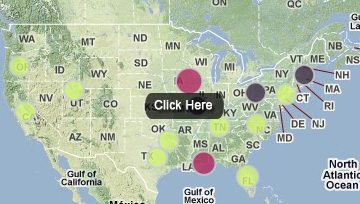 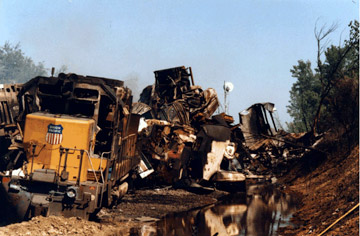 In 1997, an engineer nodded off at the controls of a train outside of Delia, Kan., according to a National Transportation Safety Board investigation. The train hit the side of an oncoming train at about 70 mph. (NTSB Photo) 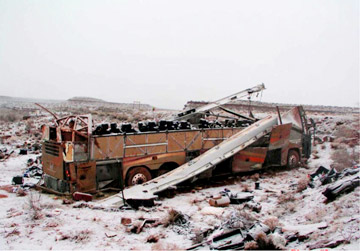