The safety board has issued several recommendations to reduce young driver deaths. They include graduated licensing and driver’s education for teens as well as restrictions on driving with peers and talking on cell phones while driving.

Some coastal states, including Maine, Delaware, Connecticut, Oregon and California, have implemented many of these safety measures targeting teens, but a number of Midwestern and Southwestern states have not. That’s because residents in those states think it would make it harder for them “to use their kids in the fields and to get back and forth from sports events,” said Ed Gruchalla, a state representative from Fargo, N.D., who sponsored a bill for graduated licensing that was narrowly defeated last year.

“We’re the only state where you can get a driver’s license at 14, load up with all your buddies and be on your cell phone at the same time,” Gruchalla said. “(It’s) a recipe for disaster.”

Terry Mitchell, chief driver’s license examiner for Kansas, said getting the bill through the Legislature took a lot of convincing. There were complaints about the expense of driver’s education, he said, and many lawmakers were reluctant to change long-standing teen driving practices.

In West Virginia, legislation to allow officers to stop drivers solely for the offense of not wearing a seatbelt comes up every year, and every year it’s defeated, said Bob Tipton, director of the governor’s highway safety program. Most lawmakers agree that people should wear seatbelts, he said, but they don’t want someone forcing them to do it. Often, the legislation just gets pushed aside by other priorities, he said.

The federal government offers a number of grants to states that adopt and implement laws regarding seat belt use, child safety seats and other safety measures.

The NTSB’s Roeber said when investigators visit states local lawmakers often ask them: “Why are you here talking to me? You’re the federal government, and this is an issue within our state.”

But it’s not just states that resist safety measures on the roads. Since 1999, the NTSB has been urging NHTSA to improve protection for bus passengers in crashes. The measures include seatbelts, stronger roofs and the installation of window emergency exits that are easier for passengers to open.

Bus accidents, while not frequent, are often deadly. More than 300 people were killed in 2008 in accidents involving commercial, school and other types of buses, according to NHTSA. Many of them died after being ejected from the bus.

Nine of the fatalities occurred on a bus filled with skiers traveling from Telluride, Colo., to Phoenix in 2008. The bus rolled down an embankment in Utah, scattering passengers in the snow. An NTSB investigation concluded that the driver was fatigued and driving too fast. Investigators also said the accident would have been far less severe if something had been done to make buses safer for passengers.

The Department of Transportation, of which NHTSA is a part, has been researching the issue since 2004 and only recently came up with proposed rules that would require new motor coaches used in interstate transportation to have lap and shoulder belts. The rules, which would not go into effect for three years, exclude buses already on the road and medium-sized school buses and city transit buses.

In a prepared statement, NHTSA said it took so long to come up with the rules because “there were no scientific data or baseline support” for the safety board’s recommendations and the agency had to do motor coach crash testing. The measures won’t take effect for another three years because manufacturers need time to redesign and do their own testing of seat belts, according to the statement.

Additionally, NHTSA said seatbelts aren’t needed in school buses and city transit buses because those buses don’t typically travel at high speeds and experience fewer roll-over accidents – the kind in which seatbelts are most effective. The agency, however, is asking for public comment on whether people would like to see buses retrofitted with seatbelts.

In 2009, nearly 5,500 people died and nearly 500,000 were injured in crashes involving distracted drivers, according to NHTSA data. The majority of those drivers were using wireless devices.

U.S. Transportation Secretary Ray LaHood has called distracted driving “a personal crusade,” sponsoring two distracted driving summits since taking office in January of last year. He has lobbied especially hard against texting while driving, a cause that President Obama embraced last year when he issued an executive order banning federal employees from text messaging while driving on government business.

The NTSB has issued two recommendations on cell phone use and driving. Both are on the board’s “Most Wanted” list of measures that could save lives, but the board has stopped short of advocating a ban on all cell phone use while driving. 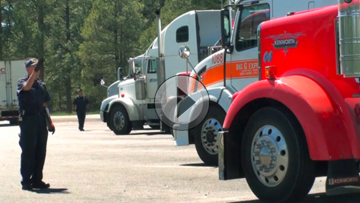 VIDEO: Rich Leimbach, director of Safety Services for the California Trucking Association, argues in favor of a new safety system being introduced by the Federal Motor Carrier Safety Administration. 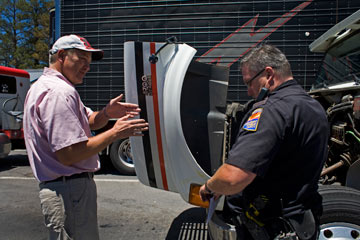