After Texas repealed its universal helmet law in 1997, helmet use fell dramatically while deaths rose, according to Bill Gossard, NTSB safety advocate specialist. A study published in the Southern Medical Journal this year concluded that in just two years helmet use in Texas dropped from 77 percent to 36 percent and motorcycle deaths rose 30 percent.

In Florida, a universal helmet law was partially repealed in 2000. Now motorcyclists 21 and older can ride helmet-free as long as they are insured. Florida also is one of the states with the most motorcycle-related deaths: 3,813 between 2000 and 2008.

The numbers do not convince the American Motorcycle Association, which has lobbied for decades against helmet laws for adults.

“The difficulty with numbers going up and down is it is very difficult to identify the variables that contribute to the statistics,” association spokesman Peter terHorst said. “Simply jumping to the conclusion that forcing everyone to wear a helmet will reduce fatalities is a short-sighted approach.”

The motorcycle association isn’t against helmets, terHorst added. It’s against the notion that government should tell adults what to do when it comes to personal safety. Helmet laws also give law enforcement carte blanche to pull people over, and they’re too expensive, he said. A helmet of the sort endorsed by the U.S. Department of Transportation carries an average price tag of between $100 and $300.

Currently, three states, Illinois, Iowa and New Hampshire, do not have any kind of motorcycle helmet law.

New Hampshire had a law for 10 years, but in 1977, the Legislature decided it should apply only to riders 18 and older. Then in 1995, lawmakers repealed the law altogether.

Iowa legislators have proposed two laws to require helmets for motorcyclists under the age of 18, but both bills died for lack of interest, said Phil McCormick, state coordinator for A Brotherhood Aimed Toward Education of Iowa, a nonprofit organization that lobbies for motorcyclist rights.

Some safety advocates say states should be forced to implement safety regulations such as helmet laws. But that, said the NTSB’s Blackistone, is not territory the safety board wants to enter.

“We try to stay out of the philosophical,” he said. “We are not prescriptive; we cannot mandate implementation.” 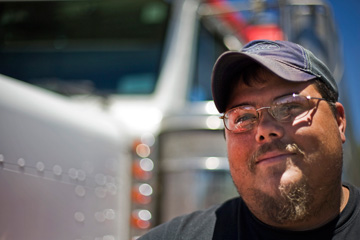 Tim Crain of Roodhouse, Ill., waits for his truck to be inspected near Flagstaff, Ariz., in June. (Photo by AJ Maclean/News21) 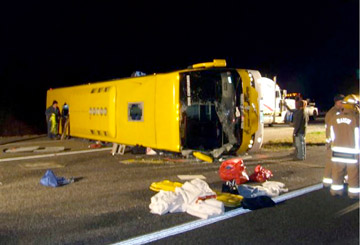 A tour bus rolled over in January of 2008 in Victoria, Texas, killing 47. The company that owned the bus had been ordered out of service for safety violations. (NTSB Photo)