When an airplane crashes, people notice and want to know what went wrong. But when people die on American highways – as nearly 100 do on average every day – less attention is paid, even by the nation’s top safety investigators.

Fewer than one-fourth of all investigations undertaken by the National Transportation Safety Board target highways, even though more people die on the roads than in any other kind of transportation accidents, according to a News21-Center for Public Integrity analysis. When the NTSB does recommend ways to reduce the carnage on American roadways, it can take years before anything is done.

From 2000 to 2010, more than 10 percent of all NTSB recommendations related to driving were withdrawn – usually because agencies and states wouldn’t act.

Four state highway recommendations are on the NTSB’s “Most Wanted” list, including one to require car booster seats for children under the age of 8, which has been on the list for more than a decade. The other still unfulfilled highway safety recommendations on the list call for stricter seatbelt and drunken driving enforcement and restrictions on young drivers.

Implementing just two of them – the ones related to “belts and booze”—could come close to eliminating highway fatalities, said Danielle Roeber, chief of the NTSB’s State Advocacy Division. In 2009, about one-third of fatal crashes involved a driver under the influence of alcohol and almost half of occupants killed in crashes were unbelted, according to National Highway Traffic Safety Administration data.

In New Hampshire, for example, there is no seatbelt requirement for adults. Eighteen states have what are known as secondary seatbelt laws, under which law enforcement officers can’t stop someone solely for not wearing a seatbelt. In other states officers can only ticket people in the front seat of a vehicle for not wearing a seatbelt, according to the Governors Highway Safety Association, which is made up of state safety officers from around the country.

All states have some form of child restraint law, but 24 do not require all children under 8 to be restrained in booster seats, as the NTSB strongly recommends. In Florida, for example, child restraints are required only for children ages 3 and under.

And while no state allows drinking and driving, many have fallen far short of NTSB recommendations. For example, law enforcement officers are not allowed to set up sobriety checkpoints in Alaska, Idaho, Iowa, Michigan, Minnesota, Montana, Oregon, Rhode Island, Texas, Washington, Wisconsin and Wyoming. Other states have balked at a NTSB recommendation that harsher penalties be imposed on drivers with blood-alcohol levels of more than 0.15.

“In another circumstance, with the same number of deaths, people would be in an uproar,” said Steve Blackistone, state and local government relations specialist for the NTSB. “Often the states are not actively opposing our recommendations per se, but the opponents are individual politicians in the legislatures.”

Deaths on the Road 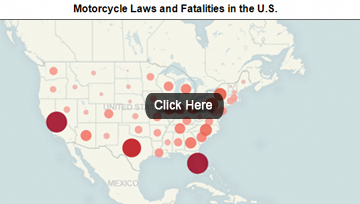 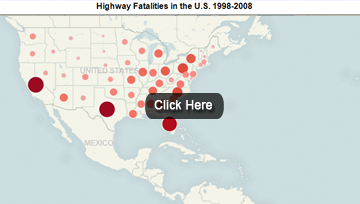 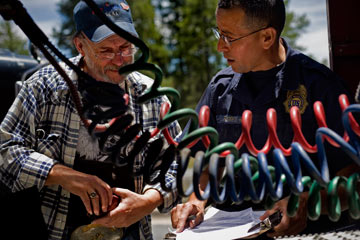 Frank Wilcox, left , 67, of Portland, Ore., discusses his safety inspection with Arizona Department of Public Safety Inspector George Flores during a road check outside of Flagstaff, Ariz., in June. Wilcox was pulled out of service due to an outstanding speeding ticket and several equipment violations on his truck. (Photo by AJ Maclean/News21)