The first recommendation came in 2003, urging states to bar teen drivers from using cell phones. The safety board acted after an accident involving an inexperienced and unbelted 20-year-old who was on her cell phone and speeding. Her car hit a guardrail, flipped over and landed on top of a minivan. A third car crashed at the scene. The driver of the SUV and four people in the minivan were killed.

The second recommendation, issued three years later to the Federal Motor Carrier Safety Administration, the agency charged with oversight of interstate buses and trucks, promoted a similar ban on wireless phones for bus drivers. The recommendation came after an accident involving a bus driver who was talking on a hands-free cell phone. He missed signs along a Virginia highway warning of a low bridge. The top of his bus struck the bottom of the bridge and one passenger was seriously injured.

While the safety board would bar teen drivers and bus drivers from using cell phones while driving, some states have gone much further.

Washington, D.C., and eight states prohibit all drivers from using handheld cell phones while driving. And 28 states and Washington, D.C., have banned cell phone use by novice drivers, according to the NTSB and the Governors Highway Safety Association.

The NTSB hasn’t yet advocated banning cell phones for all drivers because it hasn’t investigated accidents that would call for such a large-scale response, said Bridget Serchak, board spokeswoman.

But Clarence Ditlow, executive director of the Center for Auto Safety, a group that lobbies for vehicle safety, scoffed at that notion. “You almost have to avoid investigating a crash not to investigate a crash involving cell phones,” he said. “The NTSB needs to get its head out of the sand and find an accident.”

While the NTSB waits for the right cell phone accident to come along, the Governors Highway Safety Association has begun a campaign against cell phones and driving. It’s telling drivers: “Don’t use cell phones or other electronic devices while driving, regardless of the current law.”

Meanwhile, last September, board chair Deborah Hersman announced that her staff would no longer be able to use cell phones while driving.

No issue more clearly illustrates the tug of war between the states and the federal government over transportation safety than motorcycle helmet laws.

In 1967, Congress decided that states would no longer get highway construction funds unless they passed motorcycle helmet laws. The tactic worked: Within a few years, almost all states had passed helmet laws.

But by the late 1970s, states that felt coerced into mandating helmets successfully lobbied Congress to break the link between motorcycle laws and federal highway funds, and 29 states repealed their helmet laws.

By 1995, the federal government essentially gave up trying to persuade states to toughen helmet laws. Currently, only 20 states require all motorcycle riders to wear helmets, according to the Insurance Institute for Highway Safety. 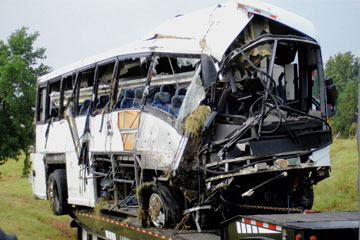 Seventeen church members were killed when a bus swerved out of control in Sherman, Texas, in 2008. The bus company had been ordered out of service for safety violations. (NTSB Photo) 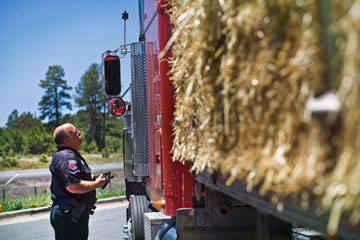 Officer Jerry Bilas of the Sedona Police Department speaks to a trucker at a rest stop along Interstate 40 outside of Flagstaff, Ariz., on June 10, 2010. (Photo by AJ Maclean/News21) 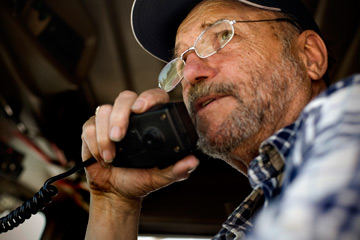 Frank Wilcox, 67, of Portland, Ore., gets on his radio to try to find a substitute driver after receiving several equipment safety violations in Arizona this June. (Photo by AJ Maclean/News21)