But the NTSB has essentially given up on 1,952 unfulfilled recommendations – one of every six – that it has made since 1967, the analysis found. And the safety board has faced increasing delays before action is taken on recommendations that are eventually implemented, no matter how big or small.

In 1988, an Exxon vessel on the Mississippi River near New Orleans swerved to avoid another ship and ended up with a 32-foot-long gash in its hull. Four thousand tons of carbon black oil spilled into the water. The NTSB recommended that the U. S. Department of Transportation improve ship-to-shore communication in New Orleans. It took nearly 12 years for DOT to comply.

In 1987, when a United Airlines plane made an emergency landing after receiving a bomb threat, a flight attendant pulled the wrong handle on the escape slide and it didn’t fully inflate. Two passengers dropped to the runway. One sprained his back and the other fractured his vertebra. It took the FAA 11 years to implement a NTSB recommendation that “Pull to Inflate” signs be located as near as possible to the proper handle in aircraft.

“The main game here is not to oppose,” said former NTSB chair Jim Hall, who served under President Bill Clinton and is now a registered lobbyist specializing in transportation safety issues. “The main game is to delay.”

“I think it’s a very fragile system,” said Gail Dunham, executive director of the National Air Disaster Alliance/Foundation. “Yes, millions get where they’re going, but the accidents are so preventable.”

Hall and Dunham were among hundreds of officials, industry leaders and safety experts interviewed by News21 project reporters from a dozen of the nation’s top journalism schools. Working with the Center for Public Integrity, the reporters analyzed thousands of pages of documents, reports and accident and investigation data from the NTSB and federal regulatory agencies.

Unless a safety measure is mandated by Congress, federal agencies must create new rules that spell out what industry has to do.

The first step is to draft a proposal that describes the new rule, how standards will be monitored and any penalties for noncompliance. The White House’s Office of Information and Regulatory Affairs, part of the Office of Management and Budget, has to review the costs and benefits of the new rule.

The proposal then is open for public comment, usually for 90 to 120 days. However, industry groups often ask for extensions to study the issue before responding. In some cases, public comment periods last for years.

The agency issues a general response to the comments and may revise the rule or even start over with a different proposal. If it decides to go ahead, the rule again must be reviewed by White House budget officers.

Sometimes, a rule never makes it out of the comment period. In 1995, for example, the FAA issued a proposed rule to address pilot fatigue. It would have shortened the amount of flying time pilots are allowed.

The proposal ignited a storm of protest from pilots unions, air carrier associations and airline companies who said the FAA didn’t have enough scientific evidence to back up the new rule. They submitted comment after comment and argument after argument that the FAA had to address.

Fourteen years and more than 2,000 comments later, the FAA said the proposal was so old it had become outdated. It was withdrawn. In September, the FAA started the process over again, issuing a new proposal to limit pilot flying times and accepting public and industry comments.

Every time the FAA brings up flight time for pilots, “you get a huge level of comments,” said Ken Mead, former inspector general for the Department of Transportation. Some of the comments are about cost, while others “argue what is fatigue (and) at what point is the human body fatigued. It’s easy to say, ‘Go fix this’…but the devil gets in the details and it gets very frustrating how long it takes.”

The NTSB does not take cost into consideration when making its recommendations, some of which can be extremely expensive to implement. The board, for example, long advocated automated train control systems to prevent train accidents. In 2008, Congress stepped in to mandate that most rail lines install the systems by 2015.The cost for installation alone is an estimated $5.4 billion nationally.

David Castelveter, vice president of communications for the Air Transport Association, a trade group that represents the major airlines, said some safety measures aren’t worth the cost. For example, when the FAA studied a NTSB recommendation to force airlines to require young children to be placed in safety seats in airplanes, the agency came to a surprising conclusion: “If parents were forced to buy seats for their children, some would have to drive instead, and the accident rates for cars is much higher than for airplanes,” he said.

The FAA has to “balance the interests of the airlines, the manufacturers, the suppliers, the people who fix the planes and the people who fly the planes,” he said. “It’s not just as simple as the NTSB says, ‘Do it,’ so let’s do it. “ 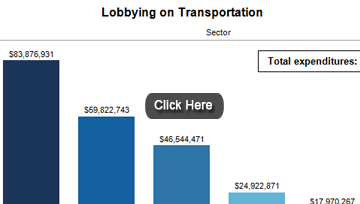 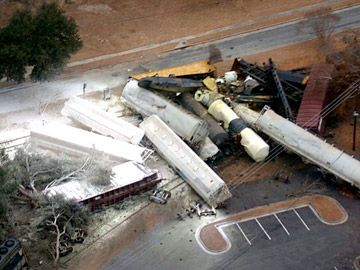 A train derailment in Graniteville, S.C., in 2005 was caused by a track switch left in the wrong position. The accident led to release of chlorine gas, nine deaths and the evacuation of 5,000 residents. (NTSB Photo) 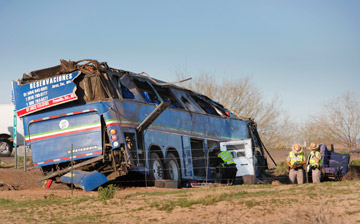 A charter bus rear-ended another vehicle and rolled down an embankment off Interstate 10 near Phoenix in March. The bus company had been ordered out of service for safety violations. (Photo courtesy of The Arizona Republic / David Kadlubowski)