Americans are exposed every day to risks in highway, air, rail and water travel that could be reduced if federal regulatory agencies and states moved faster to carry out recommendations made by the National Transportation Safety Board, which investigates accidents and proposes ways to prevent them.

More than 710 people died over the past 30 years in plane crashes in which ice built up on the wings of aircraft while the Federal Aviation Administration considered NTSB recommendations to reduce icing dangers.

The Federal Railroad Administration took 36 years after the first NTSB recommendation to settle on a rail car design that gives passengers and workers a better chance of surviving crashes.

Twenty-four years passed before the National Highway Traffic Safety Administration required trucks to have anti-lock brakes recommended by the NTSB.

Thirteen states have ignored a 1993 NTSB recommendation that boater education classes be required for anyone taking a boat out on the water. Two states – Virginia and Wisconsin – have refused to require that children wear life jackets aboard boats.

From 2000 to 2010, the average time federal agencies, states and transportation industries took to implement NTSB recommendations stretched from just over three years to 5.4 years, according to an analysis by News21, a national university student reporting project, and the Washington-based Center for Public Integrity, a nonprofit investigative journalism organization. The averages were based on actions that met or exceeded NTSB expectations. They do not include the one-quarter of NTSB recommendations that are still pending or were closed because they were so outdated the board issued replacements or because the board gave up on them.

The delays have many causes, the News21-Center for Public Integrity analysis found. Transportation industries and interest groups lobby against safety measures they fear will be expensive, intrusive or difficult to carry out. The federal agencies have close ties to those they regulate, and their rule-making processes are unwieldy and time-consuming. And the NTSB has no legal authority to force federal agencies, states or industries to implement its recommendations.

Transportation Department officials say they are working to clear backlogs and ease delays. Deputy Transportation Secretary John Porcari heads a new DOT Safety Council that has cleared more NTSB recommendations in 2010 than in any of the previous five years, according to the department.

Since 1967, the NTSB has been investigating transportation accidents and issuing recommendations – mostly aimed at federal transportation agencies – to prevent deaths and injuries on the ground, in the air and on the water. The board is independent of Congress and regulatory agencies, with five members appointed by the President for five-year terms. But it has no legal authority to force federal agencies, states or industries to implement its recommendations.

Over the past 43 years, the board has issued more than 13,000 recommendations to reduce accidents and fatalities. It has succeeded in influencing many transportation safety improvements, including child safety seats in cars, better lighting and signs on airport runways and new technologies to prevent trains from running into each other. 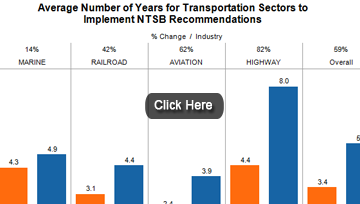 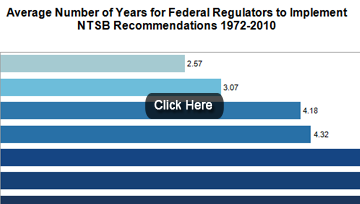 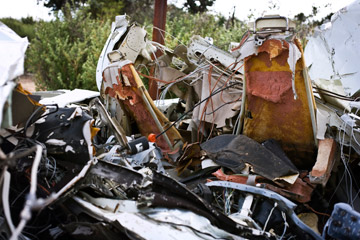 The wreckage of a Montrose, Colo., crash in 1997 is being studied at the Embry-Riddle Aeronautical University in Prescott, Ariz. (Photo by AJ Maclean/News21)