Jill Zuckman, director of public affairs for the U.S. Department of Transportation, the FAA’s parent agency, said in an e-mail that NTSB recommendations are sometimes impractical or impossible to implement. For example, she said, the NTSB “once recommended that the FAA develop a direct warning system about potential runway collisions for pilots in the cockpit. However, the technology did not exist when the board made that recommendation and still does not exist. … The bottom line is that when it comes to NTSB recommendations, there is often much more to it than meets the eye.”

The DOT also complained in a written statement to News21 that the NTSB is part of the problem, saying that agencies must submit their responses to NTSB recommendations by physical mail, and the NTSB sometimes takes more than a year to process a response.

NTSB spokesman Bridget Serchak said that’s not true. The board has accepted responses electronically for about two years, she said, and most responses are processed within 60 days. The NTSB, on the other hand, sometime waits years for agencies to respond, she said.

NTSB Chair Deborah Hersman said the board tries to be patient about the delays. “While the NTSB would prefer to see less talk and more action on our recommendations, we recognize that we often ask for things that are complicated, expensive or difficult to implement,” she said in an e-mail. “After 40 years and over 13,000 recommendations, we recognize that oftentimes the pace of implementation is slow, but we know that in the end our persistence pays off and changes do occur to improve the safety of the traveling public.”

Problems with the FAA’s rule-making process date back to the 1960s, according to a 2001 Government Accountability Office study. The study said the FAA tended to take on too many projects, continually shifted priorities and failed to hold anyone accountable for keeping projects on schedule, among other problems.

The report stated that between 1995 and 2000 the FAA completed 29 major rules; six of them took 10 years or more to complete.

That was the case after TWA 800 exploded off the coast near New York City in 1996.

Gus Sarkos, the FAA’s manager of fire safety, said the technologies were so complicated that it was a lot to accomplish in five years. “We were given a challenge to develop a system that would be practical and cost-effective and do it in (the) near term,” Sarkos said.

The speed at which a rule gets implemented often comes down to economics. Two recent NTSB chairmen, Hall and Mark Rosenker, who served under President George W. Bush, agreed that cost is often the main reason safety recommendations take so long to implement.

“There are two competing interests,” said Hall, now a lobbyist who has worked for car, train and telecommunications companies. “One is safety; the other is economics.”

Unions, companies and special interest groups are all influential in delaying rules they don’t like.

Such groups employed nearly 2,000 registered lobbyists in 2009 to work on behalf of the transportation industry, according to the Center for Responsive Politics. They spent $243.7 million lobbying Congress and regulatory agencies that year.

Lobbying firms are not required to report expenditures by issue, so it’s impossible to say how much of the money was spent on transportation safety issues and how much on other things, such as lobbying for construction projects.

When problems arose with sticky accelerators in some Toyotas, the Center for Responsive Politics and other watchdog groups pointed out that Toyota had spent nearly $25 million lobbying federal regulators and legislators in the past five years and employed former members of Congress and the executive branch as well as former engineers and officials from NHTSA, which was criticized for not acting on reports about safety problems at the company. 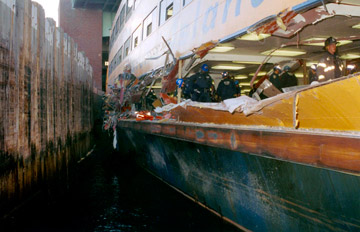 View of damage to a Staten Island ferry that ran into a pier at the St. George Terminal (Staten Island side) on Oct. 15, 2003. (NTSB Photo)

The cockpit is among the remnants of a Comair flight that attempted takeoff from the wrong runway in Lexington, Ky., on Aug. 27, 2006. (NTSB Photo)