“The motor vehicle industry is a powerful constituency,” said Kam, who is now director of the Highway Traffic Safety Associates consulting firm. “If they’re united in their opposition, that becomes a very powerful political force.”

For example, trucking companies have slowed down a new safety system designed to get unsafe commercial trucks off the roads. The FMCSA began work on the system in 2004, with a goal of having it in place by 2010. Companies and trucking associations have raised dozens of objections, questioning how they would be monitored and how violations would be assessed.

In late June, Anne Ferro, FMCSA administrator, said the proposal won’t be completed this year. Instead, it will undergo another round of reviews. The NTSB, meanwhile, elevated the matter to its “Most Wanted” list of actions needed to make travel safer.

Many safety rules and regulations for highways have to be approved by state legislatures, each with its own constituencies and priorities.

But over the years, transportation safety agencies have lost clout. Many now mostly sponsor public service safety ads, conduct studies and provide advice to elected officials. And many struggle for funding from cash-strapped legislatures. As a result, states are among the slowest to respond to federal safety initiatives, Roeber said.

“We have an understanding with states that it’s going to take 10 years” to implement safety recommendations, she said.

In 1995, a 5-month-old child was the sole casualty in a minor car crash. The NTSB urged all states to require child safety seats for all children under the age of 8. It was four years before any state passed such a law. Nearly half still haven’t.

The safety board often will spend years trying to reach a consensus with regulatory agencies and industries over safety steps. That’s because it wants those responsible for implementing regulations to be on board, said Elaine Weinstein, former head of the NTSB’s Safety Advocacy Division.

Doug Rabe, a former NTSB senior investigator who recently retired from the U.S. Coast Guard, said often the two sides don’t disagree so much over what safety measures should be taken as over minutiae of implementation.

In 1985, for example, the NTSB recommended that the Coast Guard conduct research on ways to reduce accidents on small fishing vessels. The Coast Guard agreed with the spirit of the advice but said it didn’t have the money to do all the research. It took nearly 11 years for the two sides to reach a compromise: The NTSB would do the work and the Coast Guard would provide feedback on the research.

“There isn’t that much disagreement about what should be done,” Rabe said. “Frankly, that was nothing more than a paperwork exercise.”

In an effort to reach agreement, the NTSB may accept something less than what it has asked for.

On Sept. 2, 1998, a Swissair flight left New York headed to Geneva. When crew members noticed fire and smoke in the cockpit they diverted to Halifax, Nova Scotia, but before they could make it the airplane crashed into the water. All 229 passengers and crew died.

The NTSB worked with Swiss and Canadian investigators to determine what went wrong. But because the flight data recorder and voice recorder lacked any information for the last six minutes of the flight, they were severely hampered.

This wasn’t the first accident investigation that a data recorder would have helped resolve. In the 15 years leading up to the Swissair flight, there were 52 accidents and incidents in which information from a voice or data recorder was missing when the plane lost power during an emergency.

So the NSTB put data recorders on its “Most Wanted” list.

Nine years later, the board realized that the FAA was not going to do everything it wanted because of the cost to airlines. It wouldn’t mandate expensive recorders that would continue working even if a plane lost power. And it would retrofit some planes with recorders but not others. For example, a floatplane like the one that crashed into the side of a mountain in Alaska in August, killing former Sen. Ted Stevens, R-Alaska, and four others, does not have to carry any kind of recording device.

The board decided to take what it could get. It closed the recommendation as “acceptable” in 2008.

One Response to “Travel Safety Recommendations Ignored for Years” 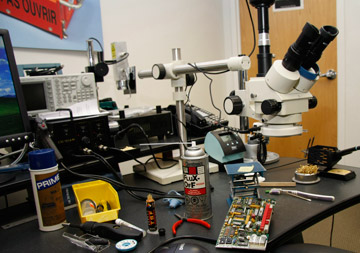 The National Transportation Safety Board investigates all air accidents in the U.S. Investigators work in the field and at the NTSB lab in Washington, D.C. (Photo by Charlie Litton/News21)